This was the eighth day in a row with a low temperature in the teens or colder.  The average low during this stretch was just 13°, twenty degrees below average.  (This March is the third coldest on record).

With a high/low of 31°/17°, this is the only Easter Sunday to be completely below freezing.  This came three years after Easter had a high/low of 35°/28°. Today saw the fourth rainstorm of an inch or more in the past three weeks.  This one was a quick mover, beginning shortly after daybreak and ending in the early afternoon.  Half of the 1.04" that fell poured down between 11 AM and noon.  At the time, March 1953, with 8.76" of precipitation measured, was the second wettest March on record (it's since fallen to fifth place).

After a nippy low of 17° two days earlier, today's high was a record-setting 76°.  These were also the temperature extremes for the month.

Beginning at daybreak and continuing until midnight, 2.05" of rain fell, a record for the date.  It was a cold rain, as the high was only 40°.

Today's high of 39° was thirty degrees colder than yesterday's.  This was also the fourth high in the 30s this month - one more than in January.

This was the 15th consecutive day with below-average temperatures.  The average high/low during these days was 41°/26°, nine degrees colder than normal.  It was also a very wet period, with precipitation falling on seven days, amounting to 4.66".

Today was the eighth day in a row with temperatures ten degrees or more milder than average.  During these days the high/low averaged 70°/52°, seventeen degrees above average, and more typical of mid-May.

Following the coastal storm of 3/21-22, the humidity fell significantly, bottoming out at 18% yesterday evening and down even further today, dropping to 13% at 2 PM (average reading in the afternoon during March is around 50%).  This was the lowest humidity level since April 22 of last year when it also dropped to 13% (the lowest reading in the years since 2000 is 6%, on March 30, 2007). 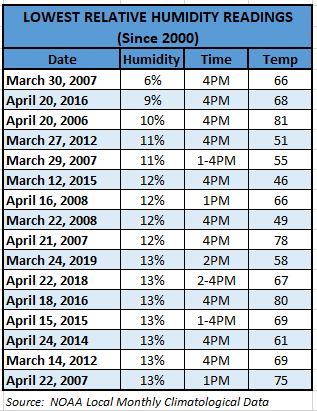 HMM....what's the lowest humidity that did NOT happen in March or April?