The temperature jumped from 37° to 76° in the span of ten hours.  Skies were clear.

It was a cold and miserable Easter Sunday as rain fell between 9 AM and 3 PM (0.62" was measured) and afternoon temperatures were only in the mid-30s. 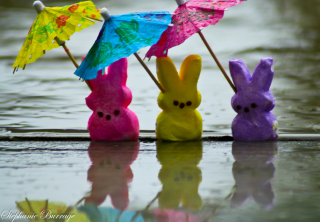 Low temperatures over the past four days were ten degrees below average and exhibited the following pattern: 25°-27°-25°-27° (today).

Today's high of 75° (twenty-two degrees above average) was 57 degrees warmer than the low on 3/21 (nineteen degrees below average), which was 52 degrees colder than the high on 3/19.

The 0.3" of snow that fell today was the last measurable snow of the season.  This winter's snowfall of 35 inches was the most in five winters (12 inches of it fell on 12/30).  Today's high/low of 37°/27° was fourteen degrees colder than average.  This was the ninth winter in which 3/26 was the date of the last measurable snow - the most of any date (none were more than an inch).

A light shower during mid-afternoon measured 0.02" and was the last precipitation of the month, which ended up being the driest March on record.  Its total of 0.80" was 0.10" less than the previous record from 1885.

After missing the season's first 60-degree reading a few weeks ago by one degree, it finally happened today, shortly after sundown.  This was the latest date for the year's first 60 since 1982, when it happened on March 30.  The temperature was in the 60s from 7-10 PM, but then a cold front moved through, so there would be no repeat performance tomorrow.

Two days after the humidity dropped to an Arizona-like 13% during the afternoon, it dropped nearly as low today, bottoming out at 14% around 4 PM.  This was the fourth day in a row to report humidity levels under 20% at some point during the day.  During the course of a March day the humidity averages in the mid-50s, but today and on 3/24 it averaged 21%.

Someone said that it 80 in NYC? Is that true

Indeed it did, which was quite a surprise. It's the first time for a reading in the 80s in March since 1998.