The temperature fell slowly through the day, from 29° shortly after midnight to 19° nearly 24 hours later.

Today's high was just 31°, twenty-two degrees below average and the coldest high temperature since 1/12.  This came the day after the winter's biggest snowfall of 1.4".

Between 2 PM yesterday and 6 AM this morning, a span of just sixteen hours, the temperature dropped by 56 degrees, from 82° to 26° - the steepest 24-hour temperature drop on record.

Today was Easter Sunday, and rain that began before sunrise changed to sleet and snow after 10 AM.  When it ended late in the afternoon, four inches had piled up.  This was a record amount for Easter and the only snow that fell this month.  (At the time, I was a teenager living in Pittsburgh, which also had four inches of snow, but it arrived shortly before sunrise.  Although we headed out for Easter Mass we turned around and came home because the roads were treacherous.) 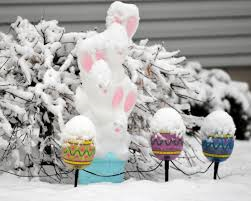 39 consecutive hours of precipitation, which began yesterday morning at 9:00, ended at midnight, totaling 2.60" (2.04" of it fell today).  There was only a two-degree difference between today's high/low (36°/34°).  3.3" of snow fell during the storm, but it was washed away by regular changeovers to rain.

Today was the third day in a row with much above average temperatures.  Although the sun was filtered through a light overcast, the temperature soared to 82° today, twenty-eight degrees warmer than normal.  Not only was it warm, but also uncomfortably humid.  However, today's summer-like warmth was four degrees lower than the record for the date set in 1945 (the warmest reading ever reported in March, later equaled on March 31, 1998).  The average high over the past three days was 78°, a reading more typical of the second week of June.

Beginning late last night and continuing through this morning, 4.1" of snow fell, the seventh snowfall of four inches or more this winter.  It brought March's snow total to 13.2", making it the snowiest March since 1967.  (Besides being snowy it was also a cold month, the coldest March since 1984.)  Today's high/low of 41°/31° was the ninth day this month that was ten degrees or more colder than average. 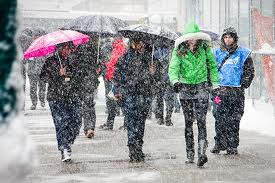 For the third day in a row the high temperature was in the 80s (81° today) - and there were two more days of this June-like warmth to follow.

Today's mean temperature was one degree above average (high/low of 55°/40°), the first above-average day since March 13.  This 15-day streak of below average days was nearly six degrees colder than average and was the longest string of below-average temperatures since a 15-day streak in July 2009.

Although it was a bright and sunshiny day, the mean temperature was eleven degrees below average (high/low was 46°/25°).  This was the 28th day this year with a mean temperature ten degrees or more below average - the most since 1916 when there were also 28 days in the first three months.  This came one year after there were 27 days between January and March.  (The typical number is eleven.)