This was the fifth day of the past six, and the fourth day in a row, to have measurable snowfall.  In total 13.9" fell.

Today was frigid, with a high/low of only 25°/13°, eighteen degrees below average.

The 0.5" of snow that fell in the pre-dawn hours (before changing to rain) was the first measurable snow since 1/21.

Despite mostly cloudy skies, the temperature soared to 70°, 25 degrees above average.  This was nine days after another high of 70°.  In both instances, these warm temperatures followed highs in the 30s two days earlier.

Today's high of 63°, sixteen degrees above average, was the first reading in the 60s in more than three months (since Nov. 27).

With a high/low of 35°/19°, this was the first day this year with a mean temperature 10 degrees or more colder than average - and the first such day in five months.  And the morning low tied Feb. 5 for the coldest reading of the winter.

Although today was just two degrees colder than average (high of 44°/low of 30°), it was only the second day in the past six weeks to have a below average mean temperature (the other day was Feb. 12, when it was 32°/20°, nine degrees below average).

Rain that fell overnight changed to snow at daybreak and fell steadily for the rest of the day, accumulating 7.5" inches by 6 PM.  This became the second biggest snowfall of the winter, passing the 4.8" snowfall of March 1.  In just the first five days of the month this became the snowiest March since 1967 as 14.1" fell from three storm systems.  Today's snowstorm brought the season's total snowfall to 42.5", the eighth time in the past thirteen winters to have more than 40 inches (average is 26 inches).  Temperatures fell during the storm, from mid-30s to upper teens by the time the last snowflake fell. 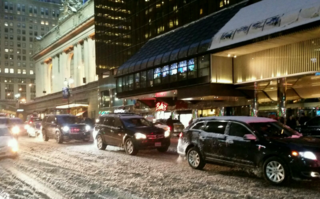 The humidity dropped to 12% during mid-afternoon, the lowest since last April, when it was 9% on 4/20.  Besides the dry conditions the day's low of 14° tied Jan. 9 for the coldest reading of the winter.

Sunny and cold (high/low of 37°/23°) with very low humidity in the afternoon, which bottomed out at 17% between 3-4:00.  This was the lowest humidity reported in Central Park since the first week of May last year.