For the second year in a row the morning low was a frigid 13° on this date.  However, today's high of 35° was significantly higher than last year's (but still 12 degrees below average).

While many towns in New Jersey and the Hudson Valley were buried by one to two feet of snow, a nor'easter that produced heavy, wet snow left far less in New York than had been predicted.  This was the second March in a row to have an under-performing snowstorm.  Despite snow falling steadily from late morning (accompanied by thunder) until 8 PM, just 3.2" was measured in Central Park (it was the first snowfall of an inch or more on this date since 1969).  This was largely due to temperatures that stayed above freezing for the entire event.  (Curiously, the snowfall forecast was adjusted upward later in the morning to 8"-12".)  Despite the modest snowfall, the amount of liquid that fell amounted to 1.41". 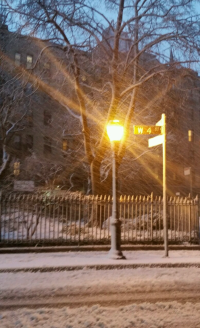 Today, with a high/low of 32°/18°, was the third day in a row with a high of 32° or colder.  The average high/low during these days was 30°/19°, fifteen degrees colder than average.  This was the first streak of this length in March since 1984, and just the tenth streak of three or more days in March since 1900.  (It was also the longest such streak this winter.)  Although no measurable snow fell during the three days, they followed four consecutive days with an inch or more of snow, totaling 10.4" (more than what fell in the four preceding months). 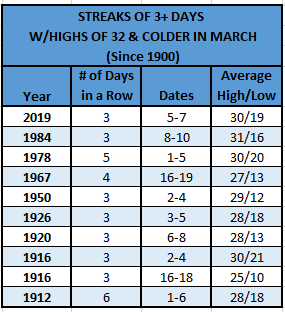 In contrast to March 2019, March 2018, which also had below normal temperatures, experienced no highs colder than 39° in the month's entirety, and its final high of 32° or colder for the season happened about one month earlier than this (on 2/3).

1969 and 2015 are the only two years on record with no reading of 49° or warmer from January sixth to March seventh.