A Glance Back at New York City's Weather: April 6

April 6, June 12, June 13 and Nov. 10 are the dates New York has experienced the most one-inch rainfalls. Since 1869 it's happened eleven times.  Interestingly, the last time it happened on April 6 was back in 1982, when the precipitation fell mostly as snow (see below). 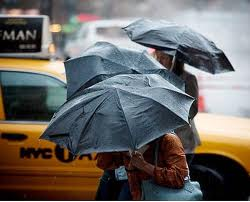 During the past eight days, the mildest high temperature was just 41°.  And the last two days of this streak had highs below 32° (more than twenty degrees below average).

This was the sixth day in a row with a low of 32° or colder, tying two other six-day streaks in 1875 and 1891 as the longest on record in April (and there have been none of this length since then).

Today's high of 68° was the only day with a high warmer than 50° in the first thirteen days of April.  The average high during the other twelve days was 47°, nine degrees chillier than average.

Today's high of 79° made this the warmest Easter Sunday since 1887, when the high also reached 79°.  This was a record high for the date (which still stands) - and the coolest record high in the month of April.

The Mets played their rain-shortened home opener this afternoon, defeating Montreal 4-2 in five innings.  The game was played in raw and windy conditions, with some light showers and temperatures only in the low 40s.  This was the prelude to a nor'easter that lashed the City after 6:00, producing 2.19" of precipitation (thru late morning the next day); 0.4" of the precipitation was snow, which fell between 11PM-midnight (actually, it fell between midnight and 1:00 AM on 4/7, but the NWS uses Standard Time year-round).

The Yankees' home opener was played in cold and overcast conditions, with afternoon temperatures falling into the low 40s.

Just 1.1" of snow had fallen in February and March, when a blizzard dumped 9.6" of snow on the City today, less than a week before Easter.  More than a foot fell in New Jersey and Westchester County.  The storm started as rain in the pre-dawn hours and changed over to snow mid-morning and lasted through late afternoon.  By midnight the temperature had fallen to a record-low 21°.  This was the most snow to fall so late in the season since ten inches fell on April 3, 1915.  To read a first-person account click here. The day after raw, drizzly and cold conditions, with afternoon temperatures hovering around 40°, today experienced a big rebound, with sunny skies and a high of 68°.

On a stunningly beautiful day, the high reached 70° and the humidity dropped to 7% late in the afternoon – the lowest humidity level reported in Central Park since 2007 (6% on March 30).  This followed a 13% humidity level yesterday afternoon (and March had a day with 12% humidity, and two others with 13%).  For five hours the humidity stayed below 10% (and dew points were in the 3°-5° range). 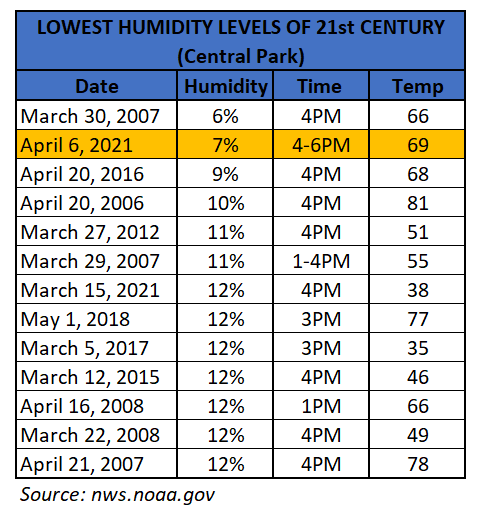 If I remember correctly, about 10 days after the April 82 Blizzard, there was ANOTHER heavy snow warning for NY City, but that one turned out to be a non-event, no snow at all. At the time I used to write a monthly column for a hobby newsletter and I recall writing something like "as I type this we are under a heavy snow warning".

How much did it rain on April 6, 2001? I recall it was a VERY rainy Friday, and the day our 6th grade got let out for Spring Break. Our plane to Palm Beach that evening was cancelled due to the inclement weather and we left the next day.

Hi John, there wasn't much in the way of rain in Central Park, which picked up 0.25" between 10AM and 5PM. The three area airports reported comparable amounts. Perhaps the cancellation was due to bad weather at your destination?

2019 - the low of 39° was the month's, and season's, last day in the thirties. only seven other Aprils have had no readings in the thirties in the final twenty-four days of the month. including this year, six of them have occurred since 1987.

Is there a way to find out the weather condition in New York City in April 1887?

Hi Peggy, that April was quite chilly and ranks as the fifth coldest on record. Coldest reading was 24 degrees, warmest was 79. There were snowfalls of two inches on April 1-2 and three inches on April 18. Try this link and it should take you to a daily report of April 1887's conditions: https://w2.weather.gov/climate/xmacis.php?wfo=okx