A Look Back at New York City Weather: April 19

The day after the high reached 86° a "back-door" cold front moved through and by mid-afternoon the temperature had dropped into the mid-50s.

The 1.96" of rain that fell between 8:30 AM and 9 PM accounted for much of the month's precipitation.  It was also a record amount for the date.  Today's high got up to only 50°, twelve degrees below average.

Although the temperature was 11 degrees cooler than yesterday, it was still a beautiful Easter Sunday as the high reached 68° (six degrees above average) under partly cloudy skies.

It appears Mother Nature cut & paste a summer heat wave in the middle of the spring as the high/low of the past four days averaged 92°/71°, 27 degrees above normal.  After highs in the 90s the previous three days, today "cooled down" to 89°.  The next 90-degree day wouldn't be for another two months (June 26).

The afternoon temperature soared to 85°, after a morning low of 48°. 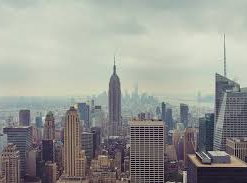 Re: 2004's High of 85 and low of 48. Do you have any data on what was the biggest range between a high and low on one date? Seems to me that late March and all of April are ideal for that in NYC, but I guess it's possible that a Winter cold front could drop the temperature 40 degrees or more in one day.

Also noteworthy is April 18th of 2008, a gorgeously beautiful Friday which was a welcome relief after a relatively chilly March and early April. Skies were bright and blue, the pope was in town visiting, I was home from college for Passover, and to my recollection, the temperature reached 87 degrees on the eve of the NBA playoffs opener.

when was the last Good Friday to have a high in the eighties before 2019? also, tomorrow would be 2019's ninth consecutive day with a trace or a measurable amount of rain. when was the last time there was a streak this long of this kind?

This was just the fifth Good Friday with a high of 80 degrees or warmer, and the first one since 1976. The four other Good Fridays were all warmer than this year's (warmest reading was 84 in 1886 and 1938). Regarding the streak of rain, I only keep track of days with measurable rain. The last one of nine days or more was in the summer of 2003 when measurable rain fell on 12 consecutive days (the longest rainy streak on record).