For the fifth day in a row the morning low was 32° or colder.  The average low during these days was 29°, which was twelve degrees below average.

The Mets played their home opener in raw conditions that were similar to those the Yankees encountered four days earlier.  Although the day started with some light snow, amounting to 0.3", it was over long before the game's first pitch.  However, fans in the stands had to contend with gusty winds that made the game-time temperature in the low 40s feel like it was in the upper 20s. 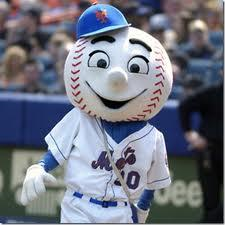 The day after 3.42" of rain fell, today was dry and warm with afternoon temperatures in the low 70s, thirteen degrees above average.  The weather was perfect for the the Mets' home opener against the Cubs.

Although today's Mets home opener was twenty degrees cooler than last season's record heat, at 71° it was still twelve degrees above average.  This was also the first day with temperatures in the 70s this year - two weeks later than usual.  (This was similar to 1965's home opener, on 4/12, which was played on the first 70-degree day of the year.)

An overnight snowfall of 0.7" was the last snow of the season, bringing the winter's total to a hefty, record-breaking 75.6".  This was 48" above the average winter, and came just two years after 53.4" fell.

Three days after a high of 92°, this morning's low was 50 degrees colder.

What had been a beautiful spring day, with a high of 74°, came to a crashing end as a series of strong thunderstorms barreled through between 7-11 PM.  What made them especially noteworthy was the fact that they occurred in the first half of April.  However, despite the storm's long duration, relatively little rain fell, with just 0.49" measured in Central Park.  This was the first rainfall of the month.

For the first time since 1988, the Yankees played their home opener in temperatures that rose into the 70s.  Under mostly sunny skies, the temperature rose to 74°.  And the cherry on top was a victory over Tampa Bay.