A snowstorm totaling ten inches began today and ended in the wee hours of the morning of the 14th.  However, the snow didn't stick around for very long as tomorrow's temperature rose into the low 50s after dark.

It was a wintry day, with a high/low of only 35°/26°, twenty degrees colder than average (the low was a record for the date, which still stands.)  This was the coldest day of the month.  Snow that began last night and accumulated 1.3" continued for a few hours past midnight added an additional 0.5" this morning.

A chilly high of 46° came just two days after a high of 84°.  Skies were overcast and winds were from out of the northeast.

After going four years without a National League baseball team to call its own, the New York Mets played their first home opener, in unseasonably cold conditions, with a high/low of 43°/38° (nine degrees below average).  Windy and overcast, there were showers before daybreak and again late in the afternoon, amounting to 0.13".  As for the game, the Mets lost to the Pirates, 4-3. 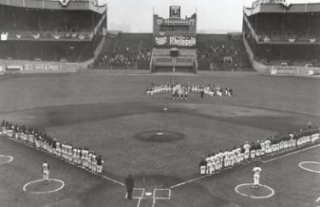 The Yankees' home opener was played under sunny skies, with temperatures in the upper 60s.  (A week earlier the Mets weren't as lucky as their game finished just as a nor'easter was bearing down on the City.)

This was the second day in a row of summertime heat, as the high reached a record-setting 88°, two degrees lower than yesterday.

It was a beautiful day for a baseball game as the Yankees' home opener was played under sunny skies and in temperatures that rose into the mid-70s.

Today was the home opener for the Yankees.  After early showers between 5-8 AM, the rest of the day was gray and chilly, with a game-time temperature in the low 50s.  This followed three days of 70-degree temperatures.  Happily, the Yankee bats were hot, as they rolled over the Indians, 11-3. 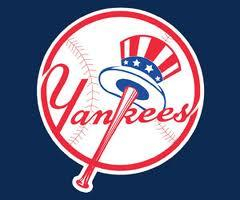 Today was the 16th day in a row in which no high temperature was duplicated.  During these days highs ranged from 47° to 90°.

Despite it being Friday the 13th, skies were clear, temperatures pleasant (low 60s, a few degrees above average), and the Yankees won their home opener, beating the Angels, 5-0.  From Yankee Stadium, smoke could be seen in the distance, rising from a brush fire in Central Park as very low humidity posed a threat for brush fires throughout the area.

Today's high of 77° was the mildest reading of the month, and made this April the first since 2000 not to see a reading in the 80s.

Today's high soared to 82° the day after the high reached 63° (which had been the mildest reading in more than seven weeks).  This was eight earlier than a year's typical first 80-degree reading.  And this morning's low of 60° was what the average high should be.

Nearly two inches of rain fell from an intense storm system that produced deadly tornadoes in the Southeast yesterday (Easter Sunday).  The 1.92" of rain that was measured was a record for the date, easily breaking the old record from 100 years ago.  Besides rain (which fell largely between 1 AM-6 PM), gale force winds raked the area, gusting close to 40 mph in Central Park and between 50-60 mph in many suburbs.  Temperatures rose into the 60s as the storm exited during early evening, and the day's high (67°) was reached after dark.

An added observation to the 2014 entry is in the previous fourteen year period (1987-2000), there were as many as eight Aprils with no eighty degree days.