Less than two weeks after a snowstorm of ten inches (on 4/13), another significant snowfall dropped three more inches - despite the fact that the temperature got no lower than 34°.  This is the latest measurable snowfall on record.

Today saw perhaps the greatest swings in temperature of any date in New York's history.  After first steadily climbing from 47° shortly after midnight to 91° at 3:00 PM, the temperature then plunged to 52° just before  midnight.  This was the result of a strong warm front moving through for about ten hours (9 AM-7 PM) and then being displaced by a backdoor cold front.  There was no rain produced by the passage of either front.  Two days later the temperature would rebound into the low 90s again, only to drop like a rock after nightfall.  These crazy swings came three weeks after 10.5" of snow buried the City. 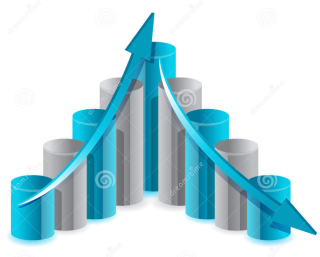 It was a cold day, with temperatures more like winter than the middle of spring.  The high/low was just 43°/29°, nineteen degrees below average.  And tomorrow's readings were very similar (44°/31°).  Both days also had winds that gusted to 25 mph, making it feel like it was in the 30s.

After a seasonably cool low of 48°, the temperature rose sharply, to 87°.  Meanwhile, although they were still milder than average, yesterday and tomorrow had highs of 70°.

A steady rain, amounting to 0.55", fell during the afternoon - the first rain on this date in 12 years.  One week after a heat wave, with temperatures 30 degrees above average (comparable to hot temperatures experienced in 1976), today was chilly, with a high/low of 52°/43°.

For the sixth year in a row rain fell on this date as mid-afternoon showers amounted to 0.14".

What a spectacular start to my summer share at Fire Island as the afternoon high soared to 88° (in NYC) after a low of 52°.

After just 0.61" of rain fell in the first twenty-four days of the month, 1.60" poured down today.  The rain came from two storm systems.  The first brought the bulk of the rain in the AM hours (1.13"), the second moved in after dark.

It was a dreary, showery, fog-shrouded day.  The 0.95" that fell (much of it between 6-9 AM, and then just before midnight) pushed April's total precipitation past the five-inch mark, the third month in a row with five inches or more.  The last time this happened was Aug.-Oct 2011, but that three-month period had more than twice as much precipitation (34.43" vs. 16.45"). 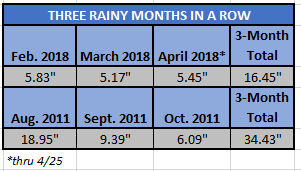