Many spent Easter Sunday digging out from a 10-inch snowstorm that buried the City yesterday.  However, by afternoon temperatures had risen into the low 50s, twenty degrees warmer than yesterday, causing quick melting.  Skies were mostly sunny. 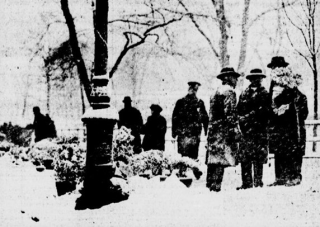 1.99" of rain, a record amount for the date, fell throughout the day and ended late in the afternoon.  Including rain that began late last night, the storm total was 2.48".  This was the biggest rainstorm since the beginning of last December when 2.73" fell on Dec. 2-3.

The Yankees' home opener was played in ideal conditions as skies were clear and temperatures slightly milder than average (60°).  And the Bronx Bombers triumphed over Texas, 5-3.

A vigorous cold front passed through in the early afternoon and the temperature plummeted 40 degrees by midnight, from 68° to 28°.

The morning low dropped to 33° for the third day in a row.  This was also the fourth day in a row with a low in the 30s, the longest such streak in April since 2007, when there was an eight-day streak.

It was a gray, raw and damp day with drizzle and mist.  The afternoon temperature hovered around 42°, twenty-five degrees colder than yesterday.

Raw and rainy, with afternoon temperatures in the chilly mid-40s.  These poor conditions caused the Yankees to postpone their home opener - the first Opening Day rain-out since 2008.  While New York was too warm for snow, four to six inches of snow fell in Connecticut, Rhode Island and eastern Massachusetts.

Despite starting out overcast, it turned into a beautiful Easter Sunday as the skies cleared late in the morning, as the temperature rose to 65° (eight degrees above average).   The air was also quite dry, with the relative humidity falling to 23% late in the afternoon.

I must also mention the beautifully warm and sunny Easter, April 4, 2010 (high of 76). That day was the beginning of a five-day period of summer-like temperatures (the highs on every day: 76, 75, 78, 92, 80). I enjoyed every afternoon of that heat wave and even took a little trip around northern New Jersey to see the early bloom of spring.