The day's low was 32°, the latest date on record for a low of freezing or colder in Central Park.  (Three days later the high was 82°.)

This was the second day in a row with a high of 89° (average high is in the upper 60s); however, today's low of 68° was fourteen degrees milder than yesterday's.  And today was sunnier.

The crash of the Hindenburg occurred this evening in Lakehurst, NJ (about 75 miles southwest of New York City).  It was never determined what exactly caused the explosion, but thunderstorms were in the area at the time (7:30 PM), so there is speculation it was lightning that ignited the helium.  A few hours earlier, in New York, a severe thunderstorm moved through between 4:00 and 5:00, dumping nearly a half-inch of rain. 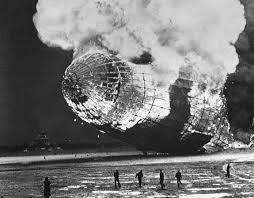 Today's high of 92°, a record for the date, was the first 90-degree reading of the year.  This was quite a contrast from 1985, which didn't see its first 90-degree day until July 14, the second latest date on record.

A soaking rain, mostly between 5 AM-noon, amounted to 1.39".  This was the seventh year in a row to have rain on this date.

For the third day in a row the AM low was 55°, four degrees above average.

Today was the sixth day in a row with overcast skies (more than we had in the entire month of April) and raw conditions.  It was also the 11th day in a row in which temperatures were below average, the longest such streak since last year's bitterly cold February.  (I was asked to comment about May's chilly/damp start on this evening's 5:00 and 6:00 newscasts on PIX11.) 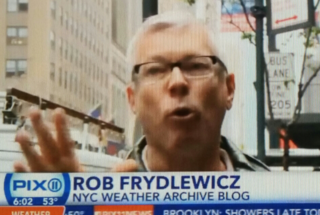 *Hydrogen* was the gas used to inflate the Hindenburg and allow it to fly. And also, helium is not flammable.

I would like to comment on the weather at the start of May 2016. Indeed, like many other New Yorkers, I thought that the cloudy weather did not fit in at all with the rest of that spring. I remember that the middle of April was very pleasant with its sunny skies and exceptionally low humidity. Only two days in April (the 4th and the 29th) were completely overcast. Then a great cloud cover came on the morning of April 29 and lasted until May 8.

However, I will say that I remember two more recent extended cloud covers that were far worse than the one in early May 2016, in my opinion. September 2018 is perhaps the gloomiest month I can remember; a rating of 6 gives it the rank of the cloudiest month during the past five years. After a strong cold front on the evening of the 6th, September 2018 had 10 completely overcast days, more than in July and August combined.

Most of the days in the summer of 2020
were very sunny. In the second half of October 2020, there were 10 completely overcast days in a very short time period, more than just 5 such days in June-September combined. The cloudy weather in late October 2020 may have reflected a general weariness of the COVID pandemic and a desire to return to normalcy.

Returning to May 2016, the cloudy weather there did not last long at all. Around noon on the 8th, the skies cleared wonderfully, and the rest of the month was sunny and warm. The German tourist in the Pix11 story should have waited two or three more days so she could have had a better time; the temperature even reached the 80s by the 12th. It is sometimes funny that the moment when you get tired of something bad, then the bad thing suddenly decides to go away.