Today in New York Weather History: May 24
Looking Back at New York City Weather: May 26

It was a raw and damp day with a high/low of only 46°/42°.  Winds out of the northeast gusted between 25 and 30 mph, producing wind chills close to 32°.  Light showers and drizzle fell throughout the day (0.32" was measured).  The day's high, 27 degrees below average, was more typical of the second week of March.

This afternoon's temperature was in the upper 50s, one day after a sizzling high of 93°.

The weather was very nice for New Yorkers when they formed their part of the "Hands Across America" chain this afternoon.  Skies were partly cloudy and the high temperature reached 80°.

It was a very cool Memorial Day as the high of 63° was eleven degrees below average.  Weatherwise, the holiday came one week too early as temperatures would be in the 90s the following weekend.

An evening thunderstorm (including hail, a rarity in Manhattan) delayed by three hours my 8:15 flight to Pittsburgh, where I was going to attend my father's funeral.  I finally arrived there shortly before 1 AM. 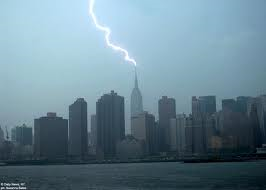 Gray skies and light showers made for a very chilly day as the high reached only 53°, twenty degrees chillier than average - and more typical of March 25.

Today, with a high of 90°, was the first 90-degree day of the year, just a few days earlier than the average date for this occurrence.  This broke a string of four years that had their first 90-degree temperature in June.

Today's high/low of 54°/45° made this, a Saturday, the chilliest day of any Memorial Day weekend in the 1971-2020 period.  Skies were mostly overcast, winds gusted to 33 mph hour, and light showers popped up throughout the morning and afternoon.  The high temperature was nineteen degrees below average.

Today was Memorial Day and it was practically a carbon copy of last year's holiday, i.e., sunny and warm.  The only difference was that today's high of 85° was one degree lower than last year's.  This was the ninth year of the past ten in which Memorial Day had a high in the 80s.