Weather Highlights of 1971 in New York 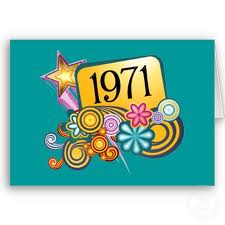 1 - Old Man Winter waited until New Year's Eve revelers got home before dumping the winter's biggest snowfall.  6.4" accumulated between 4AM-4PM (much of it fell in the storm's initial three hours).  This was the century's largest New Year's Day snowfall (and second all-time after a nine-inch snowstorm way back in 1869).

4 - A cold rain moved in late in the morning and continued for the rest of the day, amounting to 0.99".  This was the first measurable precipitation on this date in 16 years (when just 0.02" fell).

19 - The morning low of 4° above zero was the year's coldest reading.

1 -  Although Jan. 19 had the coldest reading of the winter (4° above zero), today, with a high/low of 12/7, had the year's coldest mean temperature.  There wouldn't be a colder high temperature until the winter of 1985

17-Although the light rain that fell in the middle of the afternoon amounted to just 0.05", it was the first measurable to fall on this date in fifteen years.

6 - The Mets completed their home opener shortly before a nor'easter lashed the City.  The game was played in raw, windy conditions with some light showers and temperatures only in the low 40s.

13 - The Yankees' home opener was played under sunny skies with temperatures in the upper 60s.

7 - Today's high of 93° was the first 90-degree reading of the year, coming a week-and-a-half later than the average date for this occurrence.

15 - Showery (0.32" fell) and cool, with a high/low of just 60/56.  The high temperature was nineteen degrees below average and more in line with the second week of April.

30 - Three inches of rain fell, most of which came down between 5AM-2PM.  At its heaviest, 1.04" fell in the hour between 8-9AM.  Because of the thick cloud cover there was little change in temperature, with the high of 75° just three degrees above the day's low.

27 - Rain from tropical storm Doria moved in shortly before daybreak and continued through early evening.  Rain fell heaviest between noon and 2PM when 1.76" came down.  In total, 4.16" was measured - a record for the date.  Wind gusts of 40-50 mph accompanied the rain.

28 - After a break of about four hours, a second round of rain from Doria occurred between midnight and 6AM.  1.80" fell, with more than half (1.11") falling in the hour between 2-3AM.  In total, Doria produced 5.96" of rain.  Rainfall amounts were even greater in New Jersey and southeastern Pennsylvania.  This storm brought the total rainfall since 7/29 to more than thirteen inches.

9 - Today's high was 91°, the last 90-degree temperature of the year - two weeks later than the usual occurrence.  In total, the year had eighteen days in the 90s, which was one fewer than the average number (based on the period 1930-1970).

12 - This was the ninth day in a row with a low in the 70s, the longest such streak in September on record.  The average low during these days was 72°, nine above average.

14 - In the past four days 6.70" of rain fell, with the bulk of it pouring down today between 4-9 AM and 2-4 PM.  The 3.76" that fell was from tropical storm Heidi, and came less then three weeks after tropical storm Doria flooded the area with nearly six inches of rain.  Today's amount was 0.06" shy of the record for the date.  This was the fifth rainstorm of more than two inches since the end of July.  During these seven weeks rainfall amounted to 19.84".  (Not surprisingly, 1971 would be the wettest year since 1913.)

16 - One week after the last 90-degree day of the year, today had the last 80-degree reading, about two weeks earlier than usual.

21 - This morning's pre-dawn rainfall of 0.50" brought the month's total rainfall to more than seven inches, the third month in a row this much rain has fallen - the only time this has happened (later joined by July-September 2021).

1 - Today was the third day in a row with a high of 77°, eight degrees above average.

8 - This morning's low of 45° was the chilliest reading of the month, tying October 1946 as the mildest minimum temperature ever recorded in October. (Later broken in October 2021,when the chilliest low was 47°.)

9 - After a very chilly day yesterday (high/low of 42/32), today was even colder, with a high/low of 38/28, sixteen degrees below average.  Yesterday had the first 32-degree reading of the fall.

23 - Two weeks after an early Arctic outbreak, a second one moved through today.  The high/low was just 36/26, fourteen degrees below average.

25 - Beginning late last night and continuing through this morning, a nor'easter lashed the area.  1.06" of rain fell, making this the rainiest Thanksgiving Day since 1935.  Besides the wind and rain, it was also cold, with a high/low of 39/33.  Ferocious winds, which gusted as high as 63 MPH in Central Park, produced wind chills that were in the low 20s.  These high winds also forced parade officials to ground the parade's famed balloons - the only time this has happened.

17 - This was the twelfth day in a row with above average temperatures.  During these dozen days temperatures were ten degrees above average.  After the passage of a cold front early this morning, temperatures fell throughout the day, but it was still five degrees above the norm.  This stretch of mild weather followed a two-week period of colder than average weather.

30 - Between Dec. 7 and today temperatures were close to eight degrees above average.  Thirteen of these days, including today (high/low of 51/38), were ten degrees or more above average.  0.52" of rain fell between 10AM and 3PM - the first measurable precipitation on this date since 1958 (when just 0.01" fell).

To read highlights from other years between 1970 and 2018 double click here.

Tags: weather in New York during 1971

The snow started right after midnight in NYC not 4am

You didn't mention a date but I assume you're referring to New Year's Day. I use the reporting information from Central Park, which shows that measurable snow didn't begin falling until after 4:00 AM. (Although traces of snow were reported between midnight and 4:00 AM, I don't include them in my discussions about snowfall.)

I remember January 3 was Sunday evening it was my first time in nyc can you confirm the weather. I think it was snowing that evening at Kennedy and Manhattan.

Hi Ed, there was no snowfall on that date in NYC, but there was snow on the ground because half a foot fell on New Year's Day. (And on Jan. 4, nearly an inch of rain fell, washing away the snow.)

Hi Scott, on that day skies were mostly clear, with a high/low of 75°/54°, which was a few degrees above average. The day before had the warmest high of the month, 85°.