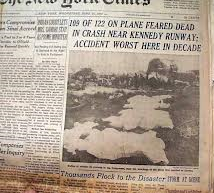 21 - This morning's low of 15° was the coldest reading of the winter.  Only one winter since 1960 has had a milder temperature for its coldest reading (20°, winter of 2002). However, based on the mean temperature (average of high and low), two days in February were colder.

4 - Although it wasn't the coldest day of the winter (see below),  today had the coldest high temperature, 27°.

12 - A quick-moving winter storm delivered the biggest snowfall of the winter, with 7.8" falling mostly between 9AM-2PM.

14 - The winter's last measurable snow fell this afternoon.  0.3" was measured, with much of the precipitation falling as sleet.

8 - Today, with a chilly high/low of 47/31, was the fifth day in a row with a mean temperature 10 degrees or more colder than average.  As a whole, these five days were 13 degrees below average.  Today was also the home opener for the Mets.

11 - A nice day for the Yankees' home opener.  Although it was chillier than average, with afternoon temperatures in the mid-50s, it was milder than the Mets' home opener.

11 - Today was Mother's Day and its high/low of 72/53 (slightly above average) was identical to last year's.  One big difference is that no rain fell this year while 0.53" fell during the evening of last Mother's Day.

24 - Today's high of 93° (on the Saturday of Memorial Day weekend) was the first 90-degree day of the year.  However, the heat was short lived as a cold front moved through during the evening, dropping the temperature into the upper 50s by the following afternoon.

12 - A steady, all-day rain amounted to 1.98".  Because of the clouds and rain, the high temperature got no higher than 63°, fifteen degrees below average.

24 - After a sweltering high of 93°, a cold front produced a thunderstorm at around 4PM that had tragic consequences.  Although it produced just 0.18" of rain, the storm created a tremendous wind shear that caused Eastern Airlines Flight 66 to crash as it attempted to land at Kennedy Airport, killing all but twelve of its 124 passengers (pictured at top of page).

25 - An intense rainstorm dumped two inches of rain between 11PM last night and 1AM today.  These were the fifth and sixth days in the past three weeks to receive more than an inch of rain.  Additionally, fourteen of the past twenty-three days had rain, which amounted to 11.77", enough to make this the second rainiest July on record.  Since no more rain fell for the rest of the month it would remain the second rainiest, falling just 0.12" short of the 1889 record.

2 - Today was the hottest day of the year as the afternoon high reached a blistering 98° after a sultry morning low of 77°.

7 - Five days after the hottest temperature of the year, today's high was a chilly 64° under overcast skies.  This was 20 degrees below average - and more typical of a day in late April.

1 - With winds out of the northeast, it was a cool Labor Day, with a high/low of just 69/55, ten degrees below average.  The one saving grace was that skies were sunny.

14 - The AM low of 46° was the chilliest reading of the month, 16 degrees below average, and tied the record for the date.

25 - Between Aug. 28 and today only two days had an above average mean temperature.  This 4-week period was 4.7 degrees cooler than normal.  Today was seven degrees below average, with a high/low of 62°/55°.

28 - The 6th NYC Marathon was held today and runners breathed a sigh of relief as the City dried out from the week's heavy rainfall.  By contrast, today's skies were sunny with near seasonable temperatures (high/low of 69°/57°).

13 - The 0.11" of rain that fell during a late night thunder shower was the first measurable rain to fall on this date in sixteen years.

14 - Today's high, under sunny skies, was a balmy 83°, just one degree shy of the record for the date.  This reading was warmer than any in September.  The last time it was warmer than today was back on Aug. 27, seven weeks ago.

15 - Today was the second day in a row of sunny and unseasonably warm conditions.  Although today's high of 82° was one degree lower than yesterday, the morning low of 66° was eight degrees warmer.

31 - Sunny and cold, with a high of 50/31, eleven degrees below average.  The morning low was the first temperature of 32° or colder this fall, a few weeks earlier than usual.  When trick-or-treaters were out and about the temperature was a nippy 43°.

22 - Light snow fell throughout the morning and continued until mid-afternoon, accumulating 1.8".  This was the first measurable snow of the winter.  And befitting the first day of winter, it was also quite cold, with a high/low of 32/24.

25 - Most of the 1.8" of snow that fell on 12/23 was gone, but a mix of sleet/snow/freezing rain this afternoon and evening accumulated 0.5", giving NYC a touch of a White Christmas.  The day's high of 33° occurred as midnight approached.

26 - Two days after the coldest readings of the entire year, today's temperature was 30 degrees milder.  And yesterday's icy mix changed to a hard rain that amounted to 1.66" by early afternoon.

this is the only year on record to have a reading of 32° or colder in October but not in November.