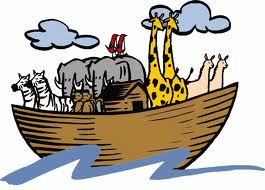 A typical month in New York sees about four inches of precipitation, and storms that drop an inch or more occur about once or twice each month.  However, the jet stream occasionally becomes stuck in a pattern that results in storms coming our way in rapid succession.  Additionally, there are times when frontal systems stall for a number of days (the last thing you want to hear as a summer weekend approaches).  When these types of atmospheric situations occur copious amounts of precipitation can be the result.  (Conversely, the same dynamics can create extended periods of dry weather.)

Rather than highlight individual rainstorms, this analysis looks at stretches of time when multiple storm systems produced excessive precipitation over the course of a few weeks or more.  What follows is a rundown (or is it "raindown"?) of the most rain-drenched periods New York City has experienced since 1970 (thru 2018):

Honorable Mentions  Between March 1 and April 25, 1983, 24.56" of rain fell - enough to make it the rainiest period on the above honor roll.  However, 1983's precipitation totals were invalidated after it was determined that Central Park's rain gauge had been broken for much of the year.  Therefore, I can't award the top spot to this period.  However, so much rain fell during this nearly 8-week period (there were ten rainstorms of one-inch or more), that even if the amount was discounted by 33%, the adjusted amount would still be 16.46", good enough for 7th place. 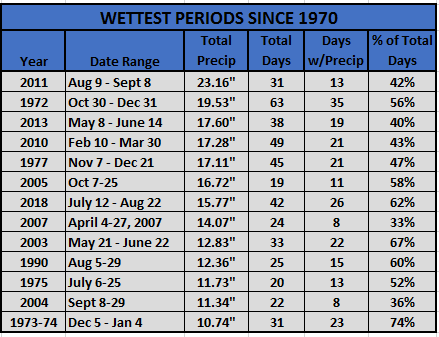 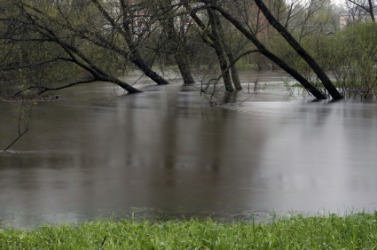 It was Hurricane Irene, not Isabel, that happened in August 2011.