A Look Back at New York Weather: June 3

This was the last day of an early season heat wave, which lasted five days.  After starting with a high of 90°, three highs of 96° followed; and today's high peaked at 95° (but after a cold front moved through, the temperature dropped to 63° by midnight).  The highs of June 1-3 were all records that are still standing.

Two thunderstorms produced significant amounts of rain; the first dumped 0.52" from 9-10 AM and then 0.43" fell between 3-4 PM.  It was also a warm day, with a high of 84°/low of 67°, eight degrees above average.  Total rainfall for the day was 1.08", the first time an inch of rain fell on this date (it's happened three additional times since then).

This was the seventh year in a row that rain fell on this date.  This year's rain began after dark and amounted to 0.16" by midnight (and 0.43" poured down between midnight and 1AM on 6/4).

Rain from the remnants of tropical storm Barry began in the evening and by midnight 1.62" had fallen.  This was the fifth year in a row in which rain fell on this date.  An additional 2.29" would fall during the morning of 6/4. 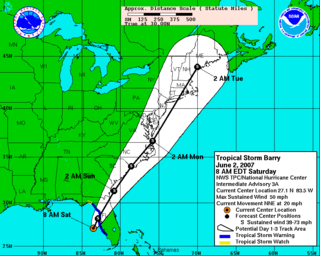 It's interesting that today may turn out to be almost a carbon copy of exactly 40 years ago. Two separate thunderstorm events within an hour or two of the same times, with similar rainfall amounts and similar high and low temperatures.

How about the thunderstorm on Saturday night, June 3rd, in 1995?