In a month that was on the cool side (2.6 degrees below average), today stood out because it was quite hot.  With a high/low of 95°/74°, it was fifteen degrees above average.  This was the first of four days this summer with a high of 95° (the other three were in July).

Although it was just a spritz, the 0.01" of rain that fell this afternoon was the first measurable rain on this date in 15 years. 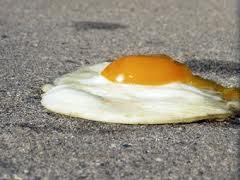