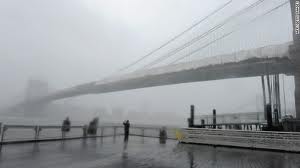 During a typical two-month period about eight inches of precipitation falls in New York City.  However, a handful of two-month periods have seen more than twice that amount, with the most recent being in 2013, when 18.10" of rain fell in May and June, ranking it twelfth all-time since records began in 1869.  This is ten inches less than the wettest two-month period, which occurred just a few years earlier when 28.33" fell in August-September 2011.  (With 18.95", August 2011 has the distinction of being New York's wettest month on record.).

Since 1869 there have been twelve two-month periods with more than eighteen inches of precipitation, nine of which have occurred since 1972 (Aug.-Sept. 1882 missed by 0.01").  March thru June are the most common months for these wet periods, while the winter months are least likely.  (The winter combo with the greatest amount of precipitation was Dec. 1978 - Jan. 1979 when 16.13" was measured.)

Although Oct. 1882 had only 1.51" of rain, when combined with September's 16.85" it was enough to make it the eleventh greatest two-month total (and before September, August was even drier than October, with just 1.15" of rain).  Four of the two-month periods listed below had somewhat similar amounts of precipitation in their respective back-to-back months: May-June 1989; Aug-Sept 1933; March-April 1980; and May-June 2013.