The excitement builds as we climb higher up the chart remembering more of New York's most high profile weather stories.  Debate may be sparked over how deserving some of the rankings are for these notable storms and extreme weather events.  And right off the bat we begin this post with a controversy ...

(Since writing this post in the summer of 2014 a number of weather events have occurred, e.g., NYC's biggest snowfall of all-time in January 2016, and the 14-day cold wave of Dec 2017/Jan 2018, that will appear on this list when it is eventually updated.)

In my opinion this is the "skeleton in the closet" of New York climatological history, a measurement issue that NYC meteorologists seem content to leave largely unacknowledged.  1983 is supposedly the wettest year on record, with 80.56" measured, more than 30 inches above average.  However, at the end of that year it was revealed that the rain gauge in Central Park had malfunctioned earlier in the year.  This should have disqualified the rain total,  or at least warranted an asterisk, but most meteorologists blindly credit it as the wettest year.  (In fact, the page in NOAA's Local Climatological Data's Annual Summary showing monthly precipitation totals for every year was left blank for 1983.)  This became an issue in 2011 when that year's rainfall came in at 72.81", ranking it second to 1983, but some believe it should be considered the rightful holder of the crown.

To gauge how rainy 1983 was elsewhere in the area I checked precipitation totals at Newark, La Guardia and JFK airports.  All three had much above average rainfall (and 1983 was JFK's wettest year), but the totals were 11 to 25 inches less than Central Park.  Additionally, the water levels at New Yokr's reservoirs north of the City were significantly below average during much of 1983.

If you look at 1998's rainfall total, you see that an average amount fell (48.69"); however, this masked two very different rainfall patterns.  After the first half of the year saw 36 inches of rain, which was 50% above average, it was followed by extremely dry conditions in the next six months, with less than 13 inches measured.  These extremes balanced each other out, and the year's total precipitation was average.

Temperatures during the first three weeks of the month were 11 degrees above average, with 14 days 10 degrees or more above average.  Nine days had highs in the upper 70s or warmer, including five in a row in the 80s (peaking at 87° on 10/7).  This ended up being the mildest October on record.  This warm stretch actually began back on Sept 25.

46.  The Year Without A Winter

The winter of 2001-02 was the mildest ever.  December was the mildest on record (until 2015), and Jan/Feb was among the ten mildest (and the winter months were preceded by the mildest November on record).  This winter also had the second least amount of snow, all of which fell within a 12-day period in January.  Furthermore, it was a very dry season, as just 4.91" of precipitation was received, making it the second driest winter on record.  This dry spell actually started in October 2000, as just 0.66" fell that month, and 1.36" in November.  This ranks as the driest five-month period on record (6.93" vs. 19.30" average).

This is New York's only April snowstorm to be officially designated a blizzard.  Precipitation began as rain in the pre-dawn hours of April 6, a Tuesday, and changed over to snow after most commuters were at work.  By evening close to 10" of wind-driven snow had fallen - and 12 to 15 inches in the suburbs of NJ and Westchester Co.  (This was following a Feb/March in which just 1.1" had fallen.)  Besides creating a commuting nightmare, the blizzard also forced cancellation of the Yankees home opener.  By midnight the temperature had plunged to 21°, half the average low for the date.  The next day had a high of only 30°, the latest date for a sub-freezing high.  This happened to be the week leading up to Easter. 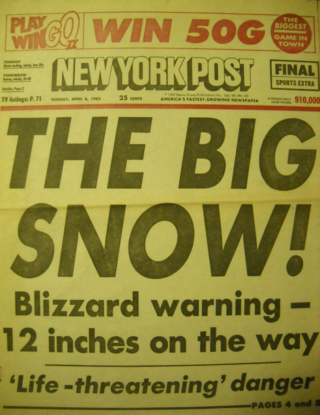 A cool summer in New York isn't a bad thing because it means comfortable conditions (and lower A/C bills).  June and July 2009 were the coolest since 1903.  During the 45-day period between June 13 – July 27, no day had an above average mean temperature.  The warmest high reading in June was just 84°, and in July it was just 86°.  Between July 2 and 14, only two days had highs in the 80s.  The two months were also very wet, with 17 inches measured (double the average amount).  Summer, however, made a comeback in August with temperatures a bit above average, and five days had highs in the 90s. 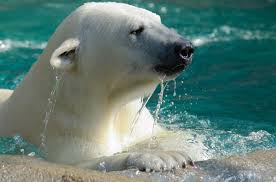 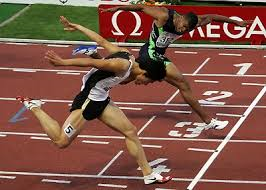 On Nov. 8, 1972, 5.60" of rain poured down in just 12 hours, creating havoc because it affected both the morning and evening rush hours.  At the time, it was the third greatest daily amount reported in Central Park.  Then, five years later, one day short of the 5-year anniversary of the 1972 deluge, an even bigger rainstorm hit, as rain fell for 30 hours on Nov. 7-8, flooding the City with more than nine inches of rain.

Earlier in the week this storm wasn't cause for much concern among forecasters in New York, but as the week went on its track began changing, bringing it closer and closer to the City.  Finally, a winter storm warning was issued Friday AM, and snow began falling around 2:00 in the afternoon; by 5 AM Saturday, 17.6" of snow had piled up - just 0.1" less than the blizzard of Feb. 1978.  The blinding snow fell in temperatures that hovered around the 20-degree mark.  Fortunately, there was the weekend to dig out - and afternoon temperatures in the upper 30s both days helped in the removal. 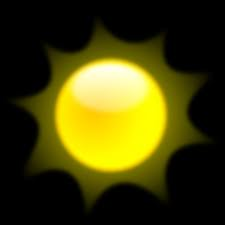 Valentines's Day, and the day before St. Patrick's Day both experienced all-day sleet storms that hampered vehicular and pedestrian traffic, and crippled air traffic, especially Jet Blue, which suspended all flights for nearly a week after the storm in February.  If the precipitation from these storms had been snow, the accumulations would have been very significant, as nearly an inch of liquid precipitation fell on Feb. 14, and two inches on March 16.  The high on Feb. 14 was 29°, and the following two days also had sub-freezing highs.  For much of the day on March 16 the temperature was below freezing, but highs the following two days were in the upper 30s.

37.  The Searing Heat & Tropical Downpours During the Summer of '88

1988 is also remembered for the serious drought that affected large parts of the country, and New York was no exception.  However, from July 9 to 28, not only was it hot, but rainy, with tropical downpours occurring on 15 of the 20 days, amounting to 8.14” (making this the wettest month in more than four years).  This was more than the previous three months combined.  Dry conditions returned in August and September, which had a combined 4.53".

Beginning Sunday night, and continuing until early Monday afternoon (Feb. 17) 19.8" of snow piled up.  When the snow began, temperatures were only in the mid-teens, with wind chills around five below zero.  Winds that gusted to 46 mph in Central Park created drifts that were three to four feet deep.  (Another President's Day snowstorm hit the City twenty-four years earlier, but that one dropped "only" 12.7".) 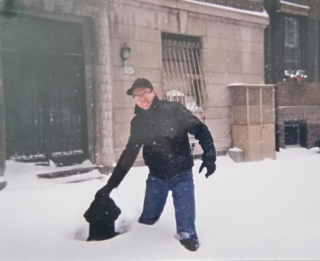 This is me venturing out as the blizzard was winding down.

Since 1934 no February has been colder than this one.  The most frigid stretch occurred between Feb. 9-18, when eight of the ten days had lows in the single digits.  This included a low of zero degrees the morning of Feb. 18.  And the cherry on top was the snowstorm on President's Day, which dumped 12.7".

This eight-day heat wave began on Aug. 28, and lasted thru Sept. 4.  High temperatures ranged from 93° to 98°, and included every day of Labor Day weekend.  It closely resembled New York's late summer heat wave of 1953, which, at twelve days (Aug. 24 thru Sept. 4), is the City's longest heat wave on record. 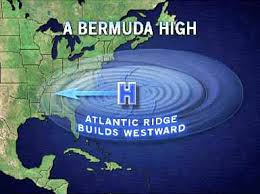 It wasn't 40 days and 40 nights of rain, but it was close.  In May and June of 1989 more than nineteen inches of rain fell, while in 2013 those same two months saw just over eighteen inches.

(Note: These rainy periods were topped in the summer of 2021, when July and August had more than 21 inches of rain, and a little more than 29 inches fell between June 30 and Sept. 1.)

Less than three weeks after 14 inches of snow snarled the City, the blizzard of Feb. 6-7 dumped nearly 18 inches.  What made it even more problematic was that it occurred on a Monday and Tuesday.  Also, snow removal techniques back then weren't as sophisticated as they are today (e.g., melting devices and chemicals), so it took longer to get streets and highways cleared.  Although it caused major disruptions, New York got off easy compared to eastern Long Island and New England, which had two to three feet of snow.  At the time this was Central Park's fifth biggest snowfall (it's now ranked 13th). 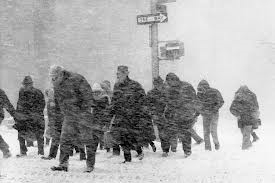 December 1989, the third coldest December on record (10.3 degrees below average) was followed by the second mildest January (9.6 degrees above average), the most dramatic swing in temperatures between two months ever experienced in New York.  Seventeen days in December had highs of 32° or colder (and every day except Dec. 31 had below average temperatures), while January had none.

Despite December's cold there was very little snow (less than two inches), or any precipitation in general.  Going into December it appeared 1989 was going to become New York's wettest year on record.  Although just 2.79" was needed (a below average amount), just 0.83" fell (and almost all of it on the last two days of the month).  February 1990 would also continue January's very mild pattern, with temperatures 6.4 degrees above average (at the time the fifth mildest). The first day of the nine-day heat wave was July 13, the day that New York's infamous blackout occurred (beginning at 9:34 PM).  The average high during the heat wave was 97° - making it the hottest of any heat wave seven days or longer (ranked by high temperature).  The last day had a high of 104°, the second hottest temperature (later tied in the summer of 2012). Manhattan was largely spared the chaos created by thunderstorms on Sept. 16 that spawned tornadoes in Staten Island, Brooklyn and Queens (0.43" of rain fell in Central Park in just 10 minutes).  The storm barrelled through at the height of Thursday's evening rush hour, largely between 4:30 and 5:30.  Service on the Long Island Railroad was suspended for the night because of fallen trees on tracks.  A few commuters were killed by tree limbs that fell on their cars. 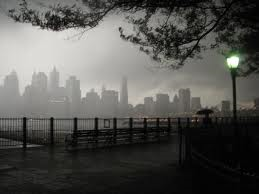 The brunt of this storm hit during AM rush hour on Friday, Dec. 11.  A storm surge flooded the FDR Drive, and also flooded the PATH station in Hoboken (something experienced at a much greater magnitude 20 years later during superstorm Sandy).  Winds of 50-60 mph made office, and high-rise apartment buildings sway noticeably, causing some elevators to malfunction.