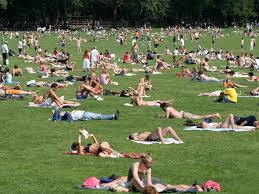 Interesting study, thanks. I remember the Sept 1970 "Heat wave" well. I was still in post-college Frat Boy mode then, and my friends and I made an "emergency" trip to the Hamptons that weekend. The after-summer bonus weather was all anyone was talking about on the beach.

I'm not sure I follow the criteria for the lengthiest warm spell. The 21 days in 1959 for example. Did every day have to be above normal to constitute a warm spell? How did you determine the beginning and end dates of a warm spell?

Thanks for any clarification. I really get into this sort of arcane weather data, so I love your blog, as I have said before.