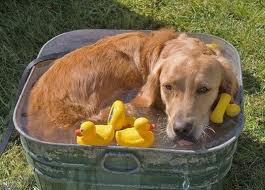 Late season heat waves can be great if your vacation happens to coincide with one of them, or if it occurs over the Labor Day weekend.  However, they can also be unwelcome, especially in years when a hot summer doesn't want to let go of its grip (as was the case in 1980, 1983, 1993 and 2010).  Since 1940 there have been more than two dozen of these last gasps of summer (of at least five days).  Some are distinguished by temperature, others by number of days.  For this analysis I discuss seventeen I found to be of greatest interest. (By "late season" I'm referring to any unseasonably warm spell that occurred between Aug. 20 thru about Sept. 20.)

This six-day sizzler merits attention because three of the days had highs in the triple digits and two others had highs of 95°.  With an average high/low of 97/76 this is the hottest of the late summer heat waves.

This one is the stand-out of all the late season hot spells - all twelve days were in the 90s, including six in a row with highs of 97° or hotter (two of which were in the triple digits).  This is also the longest heat wave in NYC history.

This sixteen-day stretch followed an eleven-day hot spell between Aug. 12-22 that ended when two days had unseasonably cool highs in the low 70s.  Then the heat returned beginning 8/25 and continued for sixteen days.  And there would be an early autumn warm streak of nineteen days from Sept. 22 thru Oct. 9.

These two are grouped together because they were very similar.  Both lasted for 21 days, the lengthiest of any of the late summer warm spells.  And both had very similar dates.  1961's was a bit hotter than 1964's, with an average high/low of 89/71 versus 87/65; 1961 had nine 90-degree days while 1964 had seven.  However, unlike many of the periods of unseasonably warm weather, there were no highs hotter than 95° in either year.  1964's sultry period was notable because the first three weeks of August had been very cool, five degrees below average, with just one day reporting an above average mean temperature.

Although three days were in the 90s, what was more striking was the twelve days in a row with lows in the 70s.  The average low during these days was 74°, nine degrees above average. This warm spell was also distinguished by having the smallest difference between the average high and low, twelve degrees.  The only late summer warm spell with a warmer average low would come six years later (but it lasted only five days).  This warm spell featured a cameo by the remnants of hurricane David, which dropped 1.29" of rain on the morning of 9/7.

Half of the sixteen days were in the 90s (five of which were 95+) and three other days reached 89°.  The average high for this stretch f days was 90°, ten degrees above average.  (Fifteen days after this hot spell ended the high reached 94° degrees on 9/22.)

The highlight was a high of 99° on 9/11, the hottest reading of a hot summer.  And the mercury hit 97° the day before.  Overall, these ten days had an average high of 91°, which was fourteen degrees above average.

This was one of the latest of the late incursions of summertime heat; it was also part of 35 days in a row with highs in the 80s that began Aug. 20.  This five-week period was also very dry, with just 0.33" of rain measured in Central Park.

The hottest summer on record extended into the first few days of September during this five-day streak of temperatures in the 90s.  And Sept. 3 would probably have reached into the 90s as well if not for cloud cover brought by hurricane Earl (the AM low was a sticky 75°).  Five days after this hot stretch ended saw two days with highs of 89° and 90°.

In 2014 New York didn't experience an extended period of hot weather until late in the summer.  Seven of the eight days saw highs of 88° or hotter, with four of them in the low 90s.

This eleven-day period began with a five-day heat wave and ended with a three-day heat wave, which included the hottest reading of the year, 97°, on Sept. 8.

For the third year in a row late summer featured unseasonably warm weather.   Earlier this summer there were two five-day heat waves, and while this six-day period didn't meet the definition of a "heat wave" (i.e., every day has a high of 90+), these days were eight degrees above average. 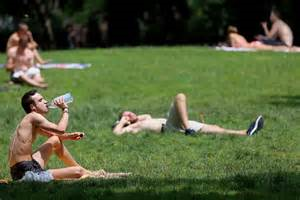 This eleven-day stretch was comprised of two four-day periods of hot weather at the beginning and end, with three close to average days in between.  Each four-day period had three days in the 90s and three days with lows of 75°+.  The average high/low of the entire eleven days was 88/75°, eight degrees above average.  The average low is the warmest of any late summer hot spell of ten days or longer. 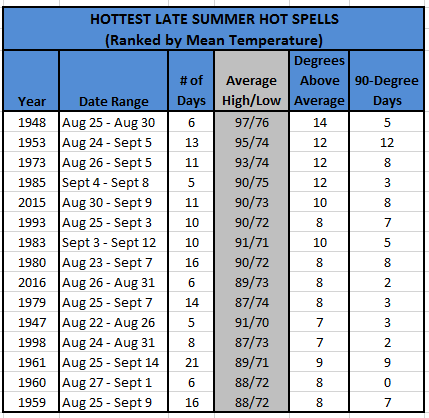 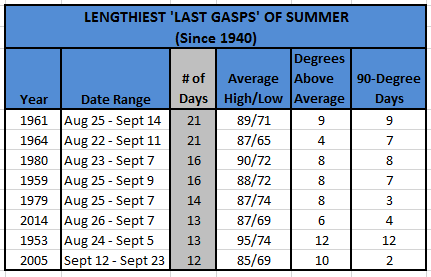 As a tennis fan I note that the U.S. Open is played around this time. This gives me a good idea of what the players go through in these extreme heat conditions.