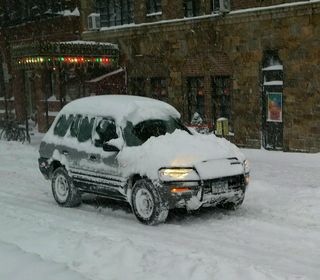 After the anticipation and euphoria created by a big snowstorm fades, some of us suffer a letdown when the flakes stop piling up (somewhat like postpartum depression).  Drunk from experiencing the fury of Old Man Winter there's hope that another storm will barrel up the coast in a few days - but it's not likely to happen (despite the tendency of the news media to end a weather story by saying, "and another storm is on the horizon").   Looking at more than twenty major snowstorms that have buried New York City in the past 100 years (13 inches or more), no major snowfalls followed in the five days afterward.  The largest accumulation, 2.9", came five days after a 14.5" snowstorm in January 1914; and 2.4" fell four days after the blizzard of January 1996 (before changing to rain).

Then there's the matter of snow melt.  New York's biggest snowstorm, in February 2006, has the distinction of having the biggest warm-up in the aftermath of a storm, with three days seeing temperatures rise into the mid-to-upper 50s.  And after January 2016's 26.8" blizzard, the third and fourth days after the storm were completely above freezing.  (The biggest warm-ups after notable snowstorms have all occurred in the 21st century.)  Although there haven't been large accumulations of snow, there have been a number of significant rainstorms in post-storm periods.  The the biggest dumped 1.80" of rain five days after a January 1978 snowstorm (13.6"); 1.49" fell five days after the President's Day blizzard of 2003 (19.8"); and 0.95" fell after a 14-inch snowstorm in the first week of December 2003. 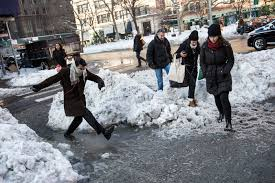 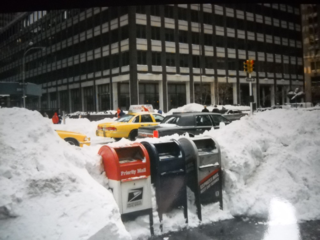 If you enjoy reading about New York's snowstorms, here are other posts you should find interesting:

We Are Living in Extraordinarily Snow Times

The Most Snowfall in 30 Days

Too Cold for Snow? Temperatures During NYC Snowstorms

A History of Snowstorms That Fizzled Out