When April Isn't Much Warmer Than March 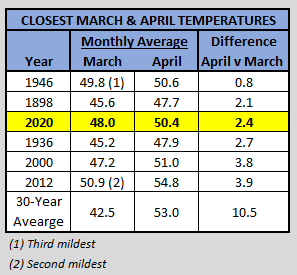 And although April 2020 wasn't chillier than March, it had no days in the 70s while March had three (making this the first April since 1940 not to have any readings of 70° or warmer).

even though April has never been colder than March, what are the years where April has had more snow than (or the same amount of snow as) March?

April has had more snow than March in 17 winters (and in one winter both months had the same amount). The last time it happened was in 2003 and 2000. And in the winter of 1915, April was the snowiest month of the winter, with 10.2" measured. Most of the times in which April had more snow, March's snowfall was two inches or less.