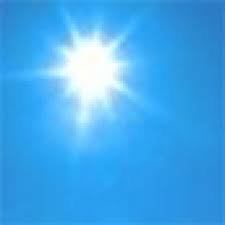 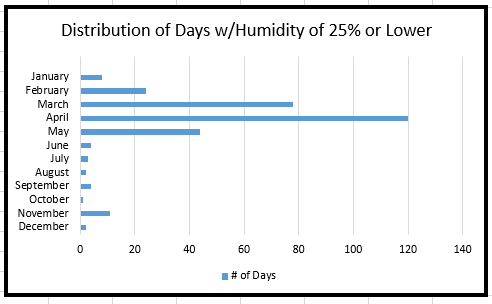 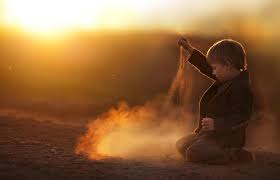 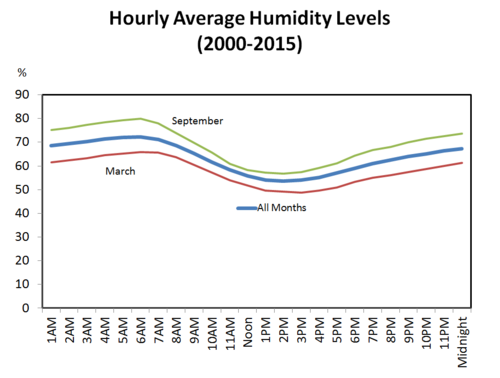 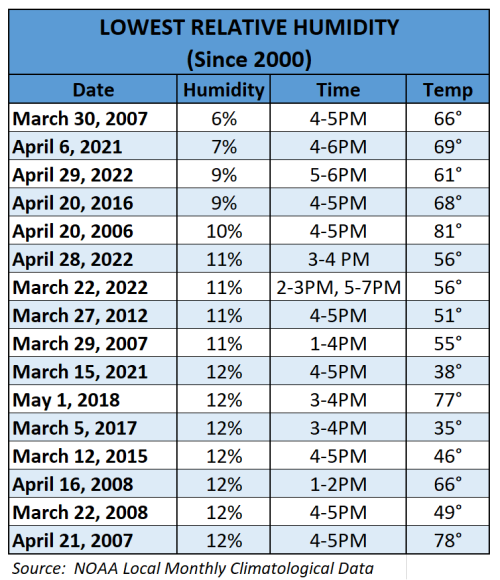 Thanks for doing this study, very interesting results. I wasn't really all that surprised at April being the driest month, since wide discrepancies between morning low temperatures and afternoon high temperatures, which April is noted for, seem to go hand in hand with low humidity. But I had not idea how rare a low humidity reading in the last 6 months of the calendar year was. I would've never guessed that. Thanks again.

Hi Ken, thanks for suggesting the topic in the first place! I'm trying to discover what it is about air masses in March and April that make days with super-low humidity more prevalent. Those two months certainly get their share of storms (rain and snow). Does it have something to do with air temperature? Or how the air descends and ascends that is different from the other months? Any thoughts?

Later in the year I may add to this post with additional years to see if humidity patterns in the 20th century are similar - and how many other instances of humidity below 10% there have been.

Hi Rob. I've wondered the same thing as you. I really don't have any theories, other than to guess that it has also something to do with the fact that Late Match thru April is also generally the peak period for tornadoes in the Midwest. Too much of a coincidence to not have a relationship.

I don't know any actual Meteorologists who might be able to answer the question. Maybe you could share your data with one of the TV Meteorologists to get their opinion. Lee Goldberg, Janice Huff and Bill Evans all seem to me to be quite data-oriented, for example. Just a thought.

Anyway, thanks again for a very interesting study.

I have come here after a pleasant period in the early spring of 2021 in which the first half of March and the first full week of April had dry weather, crystal blue skies, and exceptionally low humidity (which fell to 7% on 4/6). Days with low humidity below 25% most often occur in afternoons between late February and early May. On clear days during this time, the sun is gradually climbing up higher in the sky and shining very strong while the ground is still cold from the winter and has a low dew point. (Let me know if I have answered the author and Ken K’s speculations.)

If you observe closely, you will often see red flag warnings issued during periods with very low humidity. The low humidity is often accompanied with gusty winds at least 15-30 mph. These two factors are favorable enough to start a ground fire. The most notable red flag warnings that come to mind are those in the first half of April 2012, during a very dry period there. On the 13th of that month, I think, a brush fire broke out in Central Park. That fire was observed by spectators at Yankee Stadium in the Bronx. It took the whole afternoon to extinguish that fire.