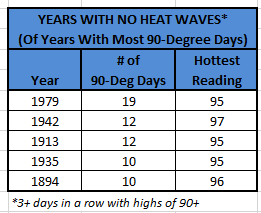 what year(s) had the least number of 90° days with a heat wave?