The Three Faces of May 2016's Weather 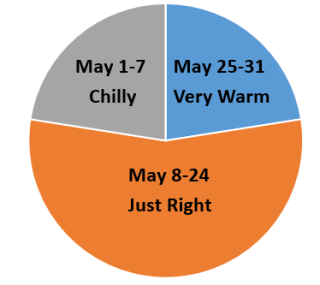 The first week of May was overcast, damp and chilly with temperatures that were 7.5 degrees below average - but it was the high temperatures that were affected most, at twelve degrees below average as temperatures never rose above 60°.  The middle two weeks were close to average, with ups and downs cancelling each other out.  The chilliest reading of the month occurred during these two weeks, 43° on 5/16.  But there were also four days with highs of 75° and higher.  Then the last week of the month brought back memories of last May, with the mean temperature 12 degrees above average.  Every day had a high of 82° or warmer, including two days in the 90s.  And four of the days had lows in the 70s.  The week's average high/low was 87/69.

While the first week had no sunny days, the last week had no cloudy days.  But, ironically, the month's biggest rainstorm occurred in this last week, during the wee hours of Memorial Day, when 1.65" fall between midnight and daybreak; nearly one inch fell in just half an hour (12:30-1AM).  This was more rain than fell in either April (1.61") or March (1.17") and was the most precipitation from one storm since the big blizzard on Jan. 23.  And although this pre-dawn storm made it the second rainiest Memorial Day on record, the afternoon turned sunny and the high got into the 80s - the tenth Memorial Day of the past eleven to have a high in the 80s (average high temperature in late May is in the mid-70s).