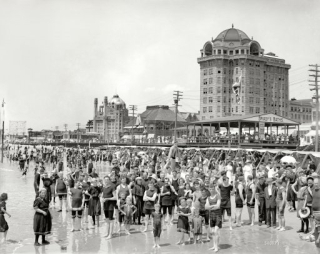 Reviewing New York's weather statistics over the past 145 years reveals that the years before 1930 were noticeably cooler than the years that followed (especially after 1980), which have seen some of the warmest years on record.  But, curiously, a number of the summers during the first decade of the 20th century had uncharacteristically warm nights, in particular, 1908.  That year stands out for a seven-week period with unusually warm nighttime temperatures unlike any that have been experienced - even in recent years.  Although highs during those weeks were three or four degrees above average, the average low of 74.5° was eight degrees above average.  Between June 30 and Aug. 17, fifteen days had lows of 77° or warmer, eight of them of 80°+.  No other summer has had that many sultry low temperatures.  It was these lows that made July the warmest on record until 1952.

Sultry low temperatures became more common after 1990, but not during the first half of the 20th century.  In addition, the diurnal variation in the summer of 1908 was very narrow, with high and lows on many days ten degrees apart or less (typical is about sixteen degrees).  What was it about the air masses or jet stream in July 1908 that prevented temperatures from cooling down after dark?  Was it a matter of air pollution/particles of soot that prevented the temperature from falling at night?  This holding onto daytime heat is a characteristic of global warming experienced during the 21st century, but one hundred years ago it was unheard of. 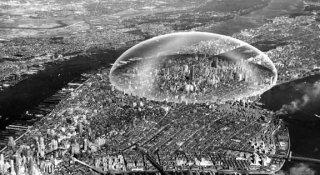 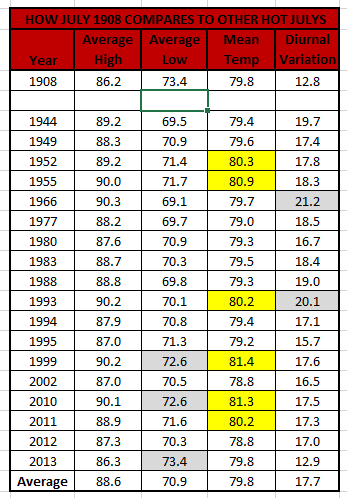 Another interesting thing about the summer of 1908. They had not one but TWO days (and they were not consecutive, July 7 and August 14) with a nighttime low of 84, which is the all time "record highest low temperature" in Central Park for any date, but a low of 84 did not happen again until July 15, 1995; it's happened one more time since, on July 22, 2013!

Even odder about it is after 1908, there's wasn't even a nightime low above 81 until that 84 in 1995 (since then there's been 7 other occurances of nighttime lows of 82-84, including 4 since 2010.....my theory on it is it is half due to a stronger "urban heat island" (which manifests itself in nighttime lows) and half "global warming" (I think most of global warming occurs in holding in heat at night.....average daytime highs have barely gone up in the last century or so but average nightime lows certainly have, especially since 1980).

Amazing study Rob. Thanks! I wonder if there was any reporting done on this in 1908. I'm sure there wouldn't be any historical perspective, but just perhaps some mention of the hot conditions.

Another possible theory is that there was something wrong with the thermometer readings that summer which went unquestioned at the time. It just seems like too much of an anomaly to be accurate.

Thanks for your comments, Harry and Ken. Harry, your added temperature information enhances the post. Ken, at first I was thinking the thermometer must have been broken as well, but then I realized that it would affect daytime temperatures as well, plus there were other summers during that decade that had very warm nights, just not as many as 1908. (Perhaps it was a visitation from aliens?)

Was it abnormally hot everywhere or just New York? Could there be any correlation with the Tunguska event in Siberia (June, 30)? Lots of electromagnetic storms discharged massive amounts of electricity in that region, a week preceding the event and for 30 days after, the sky glowed so bright with aurora, people could read newspaper print at night. There may have been a lot of solar activity, and the explosion could have been caused from ball lightning discharging.

That's a very interesting question. And while this event in Siberia may have had an impact on temperature if there was an increase in dust particles in the air (since they would have kept the air temperature from falling much overnight), many of the years of the 1900s decade had unusually warm nighttime temperatures during the summertime (and some years in the 1890s). I've pondered this occurrence of warm nights and wonder if air pollution in general was the culprit.