July 2016 Weather Recap - A Month in the Tropics

As we entered the last week of July it appeared the month's headline story would be about the heat, which took hold in the second half of the month.  But when three one-inch rainstorms occurred in the last week, the month's storyline became the combination of heat and rain.  A hot July is usually on the dry side (with rainfall about 30% below average), while a rainy July is cooler than average (by one or two degrees).  July 2016, however, was an anomaly in that it was the 21st wettest and 22nd hottest (going back to 1870).

The 7.02" of rain measured in Central Park made July the rainiest month since April 2014.  It was also the wettest July since 2009.  Additionally, the month's rainfall was more than what fell in the previous twelve weeks (since April 10).  Finally, only one July has been hotter and wetter than this July - July 1988, which had 8.14" of rain and was 2.7 degrees hotter than average (see chart at bottom of page).  In addition to the three one-inch rainfalls at the end of the month, a rainstorm that began the night of July 4th (after the Macy's fireworks exhibition had ended) and lasted through the next morning also delivered more than an inch.  And while this rain helped reduce the year's rain deficit (which was also an issue last year), it was still four inches below average at the end of the month (13% below average).

HOT, BUT DON'T BELIEVE THE HYPE 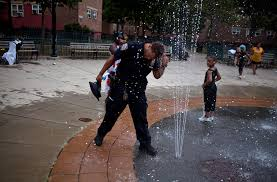 After having no 90-degree days in June, July had ten (the average is eight), with seven occurring in an eight-day span from 7/21-28.  The one day that didn't reach 90° had a high of 89°.  If the temperature had reached 90° on that day (as it did at Newark and LaGuardia Airports) we  would have had an eight-day heat wave, which would have been the longest since 2002.)  The hottest day of the month was July 23, with a high/low of 96/80, eleven degrees above average.  However, July 25, with a high of 93°, felt hotter because it was much more humid and the heat index reached 102° (the feel-like temperature on the 23rd was actually 94° because of low humidity.)

And while the second half of the month was hot and sultry, it was over-hyped by the media and some meteorologists, who put a sinister spin on the term "heat dome", leaning heavily on the global warming angle.  (I was interviewed on TV about the heat wave and I played it down as nothing extraordinary, especially compared to truly brutal heat waves of the past.) 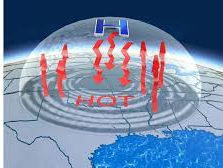 Despite all of the rain, the month was very sunny.  On the National Weather Servce's scale of cloud-cover, where zero is clear skies and ten is overcast, the month averaged a 2.8, with 19 days having clear or sunny days (a rating of zero to 2).  However, what's peculiar is that Newark and LaGuardia were much cloudier (6.3), but hotter.  JFK Airport also had a 6.3 but with slightly lower temperatures than Central Park.  Is this reality or is there a difference in the way Central Park scales cloud cover?  It seems counter intuitive that Newark and LGA, with so much cloud cover, would have 15 and 16 90-degree days, respectively, while sunny Central Park had "just" 10 hot days.  Another peculiarity is the fact that Central Park reported no thunderstorms in July but JFK and Newark had seven and LGA four.  Working in Midtown Manhattan, I heard thunder and saw lightning during a number of storms so I'm baffled by this.

I'm not sure about yourself or any of the other people who follow this blog, but I've been following weather for over 50 years and never heard the tern "Heat Done" until last month. Then again, I had never heard the term "Polar Vortex" until a year or two ago.

Yeah, I think it used to simply be called a high pressure system, the Bermuda High or a heat wave. But now the spin doctors get involved.