23-24 - A nor'easter brought winds that gusted between 33-47 mph throughout Jan. 23, but steady, wind-lashed rain didn't move in until late in the afternoon on that day.  By midnight 1.16" had fallen - and an additional 1.18" fell the next day.  It was a cold rain, with temperatures in the mid-to-upper 30s; the high winds produced wind chills in the 20s.  This storm struck on the one-year anniversary of the blizzard that produced New York's greatest snowfall of all time (27.5").  Interestingly, the 2.33" of rain that fell from this year's storm was 0.01" more than the amount of liquid precipitation from last year's blizzard.

9 - The day after a record high of 62°, winter returned with unprecedented vengeance as 9.4" of heavy snow fell during the morning (mostly between 6 AM and noon), and temperatures were in the upper 20s.  Snow fell at a rate of an inch or more/hour, reducing visibility to less than 1/4 mile for six consecutive hours.  By midnight temperatures had fallen to the upper teens.  Snowfall was in the 12"-15" range over most of Long Island, the Hudson Valley and Connecticut.  This drastic change in conditions exceeded that of Feb. 1-2, 2014 when eight inches of snow fell the day after a high of 56°.

20 - This was the end of a sunny and mild President's Day weekend, which was the mildest on record (pushing ahead of 1994's).  The average high of 61° during the three days was 19 degrees above average.  With a high of 55°, today was the coolest of the three days (Saturday had a high of 63°, Sunday's was 65°).  This would have made for a nice Easter weekend.  This was in stark contrast to the previous two President Day weekends which were the second (2016) and third (2015) coldest on record.

24 - Under sunny skies the temperature rose to 70°, the earliest 70-degree reading in ten years (and one month earlier than the average date of the first 70 of the year).  Although this wasn't a record, the morning low of 58° was.  The day's mean temperature was 26 degrees above average and came five days after a high/low of 65/53, which was 23 degrees above average.

1 - For the second time this week the high reached 70°.  However, unlike the previous time, which featured sunny skies, today was overcast with a number of showers.  This was the first March since 1972 to have its mildest reading occur on the first day of the month.

5 - The humidity dropped to 12% during mid-afternoon, the lowest since last April, when it was 9% on 4/20.  Besides the dry conditions the day's low of 14° tied Jan. 9 as the coldest reading of the winter.

14 - A much-touted blizzard was a bust as snow that began in the wee hours of the morning changed over to sleet, greatly reducing the 12-18" that had been predicted.  (This brought to mind the blizzard that fizzled in late January 2015 and resulted in an apology from the National Weather Service to the mayor because of the advanced closings that took place.)  Although there was no blockbuster snowfall today, the 7.6" that fell set a record for the date as well as the date's precipitation record (1.97", nearly twice as much as the previous record).

3 - Temperatures were nearly 20 degrees milder than last season's Mets home opener and skies were brighter (but clouds increased later in the game).  This was the second day in a row with a high in the low 60s, the first time since March 1-2 to have back-to-back highs of 60° or warmer.  And best of all, the Mets shut out the Braves 6-0 in a game that went scoreless until the bottom of the 7th inning.

10 - For the first time since 1988 the Yankees played their home opener in 70-degree weather.  Under mostly sunny skies the temperature rose to 74°.  And the cherry on top was a victory over Tampa Bay, by a score of 8-1.

13 - It was a dreary, raw and windy day with an all-day rain that amounted to 1.61" (just 0.05" less than the record for the date).  Morning and afternoon temperatures hovered around 50° and then fell into the 40s after dark.

25 - Following last week's early heat wave, today and the previous five days all had highs cooler than 70°.  Today, with steady light rain and drizzle, was the coolest day of them all, with a high of just 59°.

26 - For the fourth day in a row the low temperature was 56°, which was at the seasonal average.

29 - Overcast skies and light rain from 5 AM until noon kept temperatures stuck in the upper 50s for much of the day (the official high, 61°, occurred in the hours before sunrise).  This was the chilliest Memorial Day since 2003, when the high was 56°.

6 - Measurable rain fell for the eighth day of the last nine, but the total amount was unimpressive - just 0.41" (by comparison, the deluge of May 5 saw 2.72" fall in three hours).  Today's rainfall was 0.06", which fell throughout the day.  Temperatures during these nine days were close to five degrees below average.

23 - For the fourth day in a row the high was 83°, a few degrees above average.  Today's high was noteworthy since the day's low was an uncomfortable 76°; a low that warm is usually a springboard for a high in the 90s (or at least in the upper 80s).  Mostly overcast skies and high humidity (dew points were in the 70s all day, peaking at 75° between 9-10 PM) is what kept the temperature from rising very much.

24 - This was the third day since 6/17 to have more than an inch of rain fall from storms that lasted approximately two hours.  Each storm, however, came at a different time of day.  Today's, which produced 1.11", came at daybreak; the storm on 6/19 came at the beginning of the evening rush hour (1.28" fell); and the storm on the 17th (which dumped 1.39") was during lunchtime/early afternoon.  Additionally, today's high of 84° followed four days in a row that had highs of 83°.

22 - This was the last day of the third heat wave of the year (today's high was 92°).  This one lasted four days, one day longer than the heat waves in May and June.  After today the rest of the month would be four degrees cooler than average.

29 - It was a dreary, cool and damp day, with a high/low of only 68°/61°.  The day's high, which was reached shortly before noon, was the first high cooler than 70° in August in seven years.  It was also the coolest day since 6/8 (based on mean temperature).

4 - It was a beautiful Labor Day, with mostly clear skies and seasonable temperatures.  This was in contrast to Saturday and Sunday, which were mostly overcast and cool, with high temperatures in the upper 60s.

8 - Today became the latest date for a low in the 70s, besting the previous record, set in 2005, by one day.  However, because of clouds and high humidity the temperature never left the 70s all day (and the dew point was in the 70s from 8 AM onward).  Additionally, rain showers that fell from 8 AM until noon ended the City's 18-day streak with no measurable rain - the longest such streak in nearly two-and-a-half years.  By coincidence, the 0.22" of rain that fell today was the same amount that fell on the previous day with rain (on 9/19).

9 - The day after the latest date for a low in the 70s happened, that record was broken as today's low was 71°.  And like yesterday, the high got no higher than 77° as skies were overcast and dew points were in the muggy 70s throughout the day, very rare for October.

20 - Humidity levels dropped below 20% during the first half of the afternoon, a rarity in October, which is the month least likely to experience humidity below 25%.

29 -On the five-year anniversary of superstorm Sandy, an intense nor'easter lashed the area with gusty winds and an all-day rain that amounted to 3.03".  This was more rain than fell in the past 60 days, and the biggest rainstorm of the year, passing the rainstorm of 5/2 by 0.01".  Despite the rain and wind temperatures were on the mild side, with a high/low of 68°/60°, which was 11 degrees above average.

31 - As the warmest October on record came to a close today had the chilliest high temperature of the month.  But at 57° it was only two degrees chillier than average.  And it was a beautiful day with clear skies.

5 - The NYC Marathon was run in gray conditions with fog and mist moving in shortly before noon.  Temperatures held steady in the upper 50s throughout the race and afternoon humidity was above 90%.  And although it was just 0.01", this was the first measurable rain to fall during the Marathon in twenty years.

10 - Arctic air swept in overnight and the temperature fell steadily all day, dropping from 51° shortly after midnight to 25° nearly twenty-four hours later.  The low was a record for the date (the previous record was set in 1914) and was the earliest occurrence of a 25° reading since 1976, when it occurred one day earlier.  (The average date for the first 25° reading is 12/6.)

11 - The morning low of 24° was a record and followed yesterday's record. This was the first time since August 1994 that back-to-back record lows were set.

31 - The coldest reading of the year occurred tonight when the temperature dropped to 9° shortly before midnight (wind chill was -5°).  This made it the second coldest reading to occur for the ball-drop at Times Square, besting the previous second coldest in 1962 by two degrees (2017 was also the 100-year anniversary of the coldest ball-drop reading).  Today, with a high/low of 20°/9°, was the sixth day in a row with a high colder than 32° and the fifth in a row colder than 25°.  The last time New York experienced this many consecutive days with highs of 25° or colder was in January 2004. 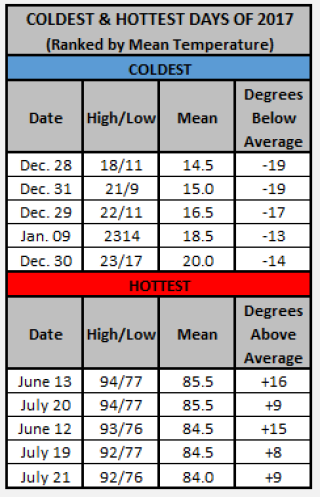 To read highlights from other years between 1970 and 2021 double click here.

Posted in By Year | Permalink | Comments (5)

The high on April 16, 2011 in Central Park, New York was actually 55 degrees Fahrenheit.

Thanks for catching the error. The correct year is 2012, which I've changed.

Hi William, thanks for pointing out the error in the year - I've corrected it. And thank you for your other observations. Regarding the temperature, 56 degrees is the high reported in the monthly Local Climatological Data report for May 2003 (published by NOAA). It's the source I use for temperatures I cite in my blog.