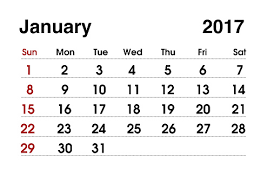 The first month of 2017 was no different from the 18 preceding months, i.e., it was warmer than average.  And it was well above average, by 5.4 degrees, with only seven days colder than average (and eleven were 10 degrees or more above average).  It ranks as the 13th mildest January on record.  The period between 1/11-1/29 was especially mild, with temperatures ten degrees above average.  During this period there were thirteen days in a row in which the temperature stayed above 32° and sixteen days in a row with above average mean temperatures.  The warmest reading occurred on 1/12, when the high reached a record-setting 66° - the warmest reading in January in ten years.  Other highlights:

The month had 7.9" of snow, which came from four snowfalls; much of it fell on 1/7 when 5.1" piled up.  The monthly total was an inch above average, but what's noteworthy is the fact that this was the snowiest January of any of the 25 mildest (which averaged 2.3" of snow).  Additionally, four of New York's coldest Januarys had less snowfall than January 2017 (and three had a similar amount). SMALL VARIATION BETWEEN HIGHS AND LOWS

Also noteworthy was the month's diurnal variation in temperature, which, at 9.4 degrees was the smallest of any January (the 50-year average is 12.3 degrees).  It was also the only January to have a diurnal variation less than 10 degrees (January 1960 and 2011 had DVs of 10.1 degrees).  Seven days had variations of of five degrees or less; however, one outlier was 1/13, which had a 30-degree difference between its high and low (62/32). 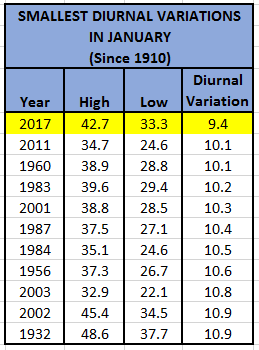 A few days before the record high of 66° there was a three-day period with temperatures that were quite cold, with every day having highs only in the mid-20s.  (In a span of three days the high temperature went from being fifteen degrees below average to twenty-eight degrees above average.)  Average high/low during this cold snap was 25/17, eleven degrees below average.  This included the coldest reading of the month, 14° on 1/9.  The 5.1" snowfall fell during this cameo appearance of Old Man Winter. 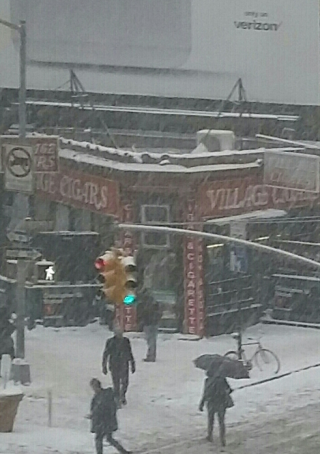 Experiencing the seasons vicariously from Africa. Thanks for sharing

the average mean temperature last month was 38.3°, which was just three tenths of a degree warmer than this month. the last time there was such a difference in December and January that was this minimal was in the winter of 1986 (34.2° in Dec. and 34.1° in Jan.).