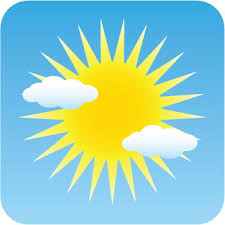 Propelled by an eight-day period between Feb. 18-25, which had temperatures that were sixteen degrees above average (high/low of 61/44), February 2017 became the mildest on record.  Five days had highs in the 60s and one reached 70° - the earliest 70 in ten years.  And on Feb. 24 the mildest low temperature ever recorded in the month of February was reported (58°).  This month was in stark contrast to two years ago when New York experienced it coldest February since 1934.  This year had no Arctic outbreaks; six days had below-average temperatures, in three pairs of two.  However, despite the abundance of mild conditions, winter made a jolting cameo appearance on Feb. 9, when the day after the high reached 63°, 9.4" of snow fell during the morning.  The day following the snowstorm was the only one with a high of 32° or colder. 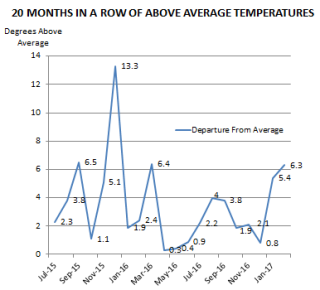 this month had six days of measurable precipitation. this was the fewest number of such days in February since 2009 and the last February with fewer days was in 2004 when there were five days.