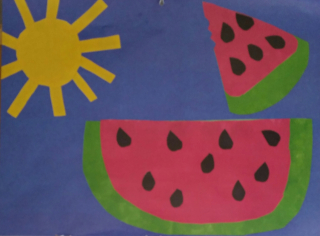 June 2017 was close to average temperature-wise (+0.6 degrees) and rainfall was close to average as well (4.76" vs. average of 4.41"), but as so often happens with averages, they masked the true "personality" of the month.  Specifically, the first nine days were six degrees cooler than average, and then the rest of the month was three degrees warmer than average; meanwhile, after less than half an inch of rain fell thru June 16, the remaining two weeks were on the rainy side, with more than four inches measured.

The highlights of the month occurred mostly during two eight-day periods.  The first, from June 6-13, pertained to temperature, with two days that were 10 degrees or more below average (highs in the 50s and 60s) quickly followed by three that were 10+ degrees above average (highs in the 90s).  The month's coolest and hottest days (based on daily mean temperature) were at the beginning and end of this eight-day period: a high/low of 58/52 on 6/6 (fourteen degrees below average) and 94/77 on 6/13 (fifteen degrees above average).  The second eight-day period was rain-related, most of which fell during three downpours of an inch or more on 6/17, 6/19 and 6/24; these periods of heavy rain each lasted two to three hours. 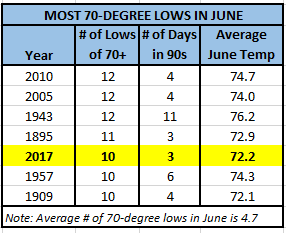 Wouldn't the fact that June 2017's coldest and warmest readings (51° and 94° respectively) mirrored June 2012's be worth putting up here as well?

With so many findings to consider, I choose a handful of observations that I feel are the most compelling. Now, if in addition to the same hottest and coolest readings, June 2017 and 2012 had the same average high/low as well as the same amount of rainfall, now THAT would have warranted mention in the post!