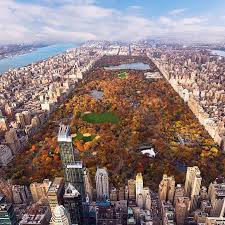 November 2017 featured two weather highlights.  The first was the flash-freeze of Nov. 10 and 11.  After eight weeks of very mild autumn weather that began in mid-September (including the warmest October on record), Arctic air moved in on Nov. 10, ushering in the earliest reading of 25° since 1976.  The lows on the 10th and 11th were both records - the first back-to-back record lows since August 1994.  The month's second noteworthy aspect was minimal rainfall.  With just 1.58", November was the driest month since March 2016, the driest November since 2001 and the fifth driest since 1970.  Nearly half of the month's rain fell on 11/7, when 0.70" was measured, mostly during the evening.  November's rainfall deficit was in contrast to a late October nor'easter that produced New York's greatest rainfall in more than three years (3.28" on 10/29-30).

Temperature-wise the month was 1.1 degrees below average, but it was the average low that made the month below average overall as it was 2.5 degrees below average while the high was close to average. The first and last six days were nearly five degrees milder than average while the period from Nov. 7 thru 24 was five degrees colder than average.  Only five days had highs of 60° or milder - the typical number is nine.  However, it was the chilliest November since 1959 to have two or more days with highs in the 70s.  (In recent history the fewest number of 60° highs was in 1962, when there was just one; the most is sixteen, in 2005, 1999 and 1979.)  Besides Nov. 10, 11 and 12, Thanksgiving Day (11/23) was the only other day during the month to have a low of 32° or colder. 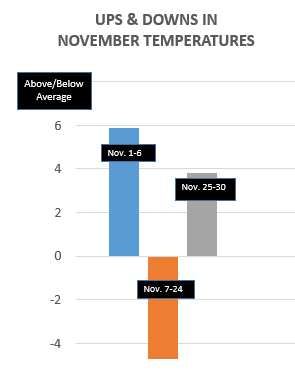 although this month was on the dry side, this was the first November with 10 or more days of measurable rain since 2008 when there were 11 wet days.