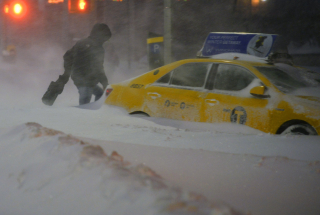 New York's three biggest snowstorms each buried the City under more than two feet of snow (four others have produced between 20"and 21").  They occurred in different months of the winter: the biggest, totaling 27.5", was in January 2016; the second greatest, 26.9", buried New York in February 2006, and the third deepest, 26.4", was the day after Christmas in December 1947.  And the bulk of these storms' snow fell on different days of the week: Friday (1947), Saturday (2016), and Sunday (2006).  The amounts of each storm were approximately what falls during an entire winter.

Although it's fallen to third place, what makes the 1947 snowstorm stand out from the other two is that it occurred during a cold and very snowy winter while the others accounted for much of the snow during their mild winters.  The 2006 snowstorm accounted for all but 13.1" of the snowfall that winter while 2016's blizzard accounted for all but 4.6".  By contrast, the winter of 1947-48, which at the time was snowiest on record (now ranked second behind the winter of 1996), had 37.4" of snow on top of December's enormous accumulation.  Each month of that winter had temperatures well below average, especially December.  By contrast, the winter of 2006 had the fourth mildest January on record while the winter of 2016 was the second mildest on record, largely due to the mildest December on record. 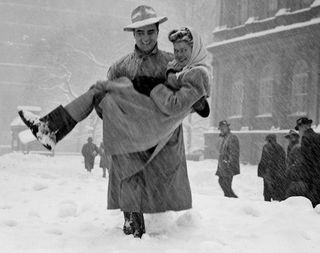 Interestingly, before being crowned the biggest snowstorm in NYC history, 2016's snowstorm was ranked second, with 0.1" less than 2006's amount.  Then three months later the National Weather Service announced that it had re-evaluated the measurement at Central Park's weather station and added 0.7" to the originally reported amount, making it top dog.  (The winter before that the NWS adjusted three snowfalls, adding 3.1" to that winter's snowfall total.)

Although it's now ranked third, the snowstorm of Dec. 26-27, 1947 may have been the most debilitating of the three storms.  First, the snow of that storm had a higher water content than the others, especially 2006's.  1947's snowfall was equivalent to 2.40" liquid compared to 2.32" for 2016's blizzard and 1.86" for the fluffy snow of 2006.  Second, the days following the 1947 storm were much colder than those after the other two storms, so snow melt was minimal.  Temperatures during the five days after the 1947 storm were seven degrees colder than average, with high temperatures ranging from 28° and 35°.  By comparison, temperatures after the 2006 and 2016 storms were six and four degrees above average, respectively.  In 2006 three of the five days after the Feb. 11-12 blizzard saw highs in the mid-to upper 50s.  In 2016 the third and fourth days after the storm never saw the temperature drop to freezing or colder.  Add to these reasons the fact that snow removal techniques of 70 years ago were primitive compared to those of the 21st century, and a strong argument can be made that the 1947 snowstorm was the worst of the three. 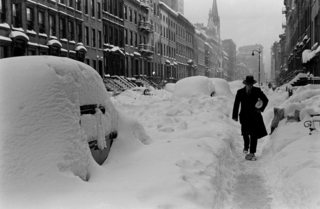 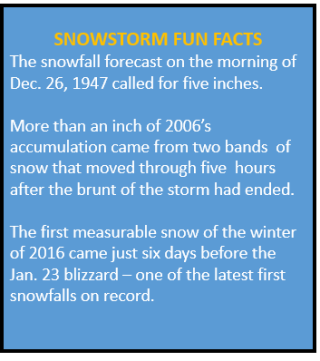 I was just short of my 13th birthday when I was caught in the 1947 storm. My mother and I sryluggled to walk 1/2 mile uphill to reach home. And I believe there was another storm the following week.

To Marvin Polonsky. Yes, I was told by my manager that the 1947 snow storm was followed by a second storm.

Although the rest of the winter of 1947-48 had nearly 40 inches of additional snowfall, all of the snowfalls were less than six inches (and the biggest of them, 5.7", wasn't until late February). Perhaps, when he said the 1947 snowstorm was followed by another, he meant the following December, which had a snowstorm of 15.8" on 12/19.