Longest Streaks of High Temperatures of 32 Degrees or Colder

Since the winter of 1940 there have been ten streaks of ten days or longer with high temperatures that were 32° or colder (streaks of this length occur, on average, once every eight years).  The most recent, a streak of fourteen days, occurred in the winter of 2017-18 (Dec. 26 thru Jan. 8).  It was the third longest on record, behind a sixteen-day streak in the winter of 1961, and a fifteen-day streak in the winter of 1881.  This winter's streak closely mirrored one during the winter of 2001 that also started in December and ended in January.  (However, it's temperatures weren't as cold and was one day shorter.)  What follows are some other interesting observations about New York's longest cold streaks (nine days or longer): 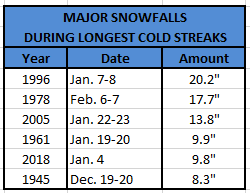 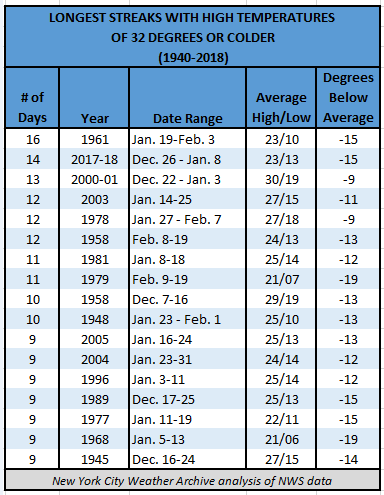