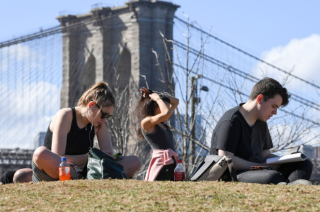 Some weather records for warmest and coldest month have been in place for decades.  For example, the warmest January, March and June have been on top since 1932, 1945 and 1943, respectively.  But this February was an extremely rare instance in which a new record broke the one that was  established just one year earlier (October 1946 also lost its crown 12 months later as did August and November 1895).  With an average temperature of 42.0, February 2018 was 6.7 degrees above average.  This was 0.4 degrees milder than Feb. 2017, and just 0.5 degrees below a typical March.

The highlight of the month was the June-like high of 78° on 2/21.  Not only was it the eleventh time a 70-degree reading occurred in February, it was the warmest reading ever reported in February, besting the previous record (in 1930 and 1985) by three degrees.  (But within 24 hours the temperature fell into the more seasonable upper 30s.)  This was also the second February in a row with a high in the 70s - the only time this has happened.  Additionally, for the first time, three Februarys in a row ('16, '17, '18) had five or more days with highs in the 60s or warmer.

Compared to last February, February 2018 was also much wetter, with more than twice as much precipitation (5.83" vs. 2.48").  At one point during the month there was a stretch of twelve days (Feb. 14-25) in which every day but one had measurable precipitation, one of the greatest concentrations on record.  However, the amount of precipitation was a relatively modest 2.01", which was just a little more than what fell from the rainstorm of Feb. 10-11 (1.79").

There were 17 days of measurable precipitation, tying it with February 1884 as the most ever for the month.  However, despite this high frequency the month didn't rank among the ten wettest (nor did Feb. 1884, which had an inch less precipitation than 2018).  However, it still had nearly twice as much precipitation than average (5.83" vs. 3.04") and ranks as thirteenth wettest February (placing it among the top 10% of the years since 1869).  Lastly, this was the wettest February in eight years. 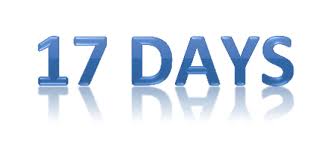 There were a few touches of winter during the month, with the coldest day, on 2/3, having a high/low of 31°/16° (coldest day of the month).  In total there were eight days with colder than average mean temperatures (two more than Feb. 2017).  4.4" of snow fell on 2/17 despite the temperature not being 32° or colder while the snow was falling.  This snowfall came at the end of a week that had three days with highs in the low 60s and was followed a few days later by days with highs of 67° and 78°. 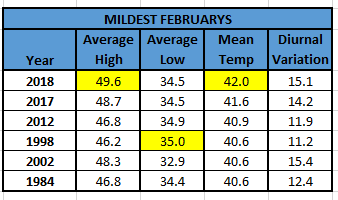 Finally, February's record warmth came just four months after the warmest October on record and one month after New York experienced one of its longest stretches of high temperatures of 32° or colder (fourteen days).  And just three years ago one of the coldest Februarys on record had an average high that was more than two degrees colder than this February's average low (32.1 vs 34.5). 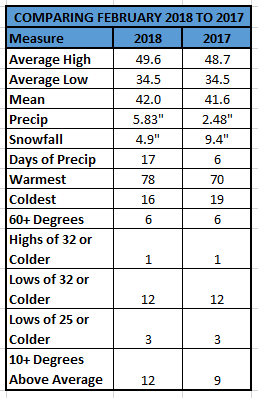 Other recaps of past Februarys:

This the first time record (warm) temps for the same month were set in back to back years since November 1895/1896.

another interesting fact about February 21's high of 78° is that no other day between November 16 and March 9 has ever been this warm.

this brought to mind the Augusts of 2015 and 2016 when 2015 was originally the third hottest but then 2016 knocked the month down to fourth hottest and took over the spot as third hottest (the two months were two tenths of a degree apart).

Something came to my mind when you said, "At one point during the month there was a stretch of twelve days (Feb. 14-25) in which every day but one had measurable precipitation", because last February, during the very same date range, all but one of those days had no measurable precipitation. Also, this month, which was the wettest February in eight years, reversed course from last month, as 2018 was the driest January in eight years.