Although Central Park and LaGuardia are only seven miles apart, their snow: liquid ratios from the recent Dec. 16-17 snowstorm were very different.  Although the weather stations at each location reported similar amounts of snow (10.5" and 10.1", respectively) LGA's was from much less liquid (0.69" vs. CPK's 1.52").  Newark Liberty airport also had much less liquid than CPK but measured 11.4" of snow.  If the one-inch of snow for every 0.10" of liquid ratio applied, Central Park would have had more than 15" of snow, LGA just 7".

And the disparity between the two locations was even greater in the last few hours of the storm (after midnight on 3/22) as Central Park picked up 0.2" of snow from 0.06" of liquid while LGA measured 0.9" of snow from just 0.1" (which would produce a very powdery snow).  That's extreme and more common when the air temperature is in the teens, not one degree above freezing.  Bottom line, LaGuardia's ratio is very puzzling. 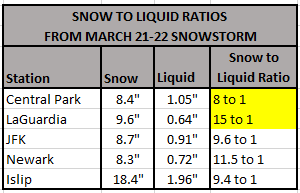 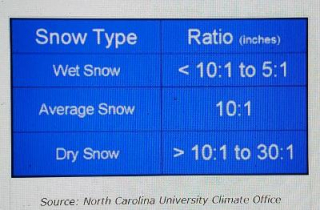