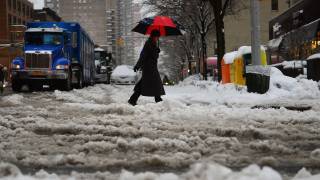 For the second year in a row March was colder than February (both which were the mildest on record), a rarity that occurred just once before, in 1890 and 1891.  March 2018 will also be remembered for the four nor'easters that lashed the area in a three-week period as well as a 22-day streak with below-average temperatures.  This was the fifth March of the past six that was colder than average.  However, despite the chronic cold there were no Arctic outbreaks; the coldest low was just 27° (the coldest reading in March is typically in the upper teens) and the coldest high was 39° (the typical coldest high is around 32°).

Nor'easter #1 (March 1-2) - This was a rain event, with 2.24" measured.  Colder air moved in as the storm exited in the early evening, briefly changing the rain to wet snow, but it didn't produce a measurable accumulation.

Nor'easter #2 (March 9) - This storm produced wet snow which accumulated 3.2" in the afternoon and evening.  Despite a prediction of 8-10" the accumulation was kept down because temperatures stayed above freezing.  Total liquid precipitation was 1.41".

Nor'easter #3 (March 13-14) - This was the least consequential of the storms.  Despite a prediction of significant snowfall there was no measurable accumulation, and just 0.36" of rain.  Curiously, Central Park was the only reporting site in the metro that didn't have measurable snow (JFK had 1.2" while LaGuardia and Newark both reported 0.3").

Nor'easter #4 (March 21-22) - This was the only storm of the four in which the temperature was 32° or colder for much of the duration.  As a result, a significant amount of snow, 8.4", piled up, making it one of the City's ten largest snowfalls after March 15.

All but 0.11" of the month's 5.17" of precipitation came from these nor'easters.  This was the second month in a row with more than five inches of precipitation, the first time it happened since Dec. 2014/Jan. 2015.  The combined 11.00" that was measured was close to 50% above the average amount of precipitation for the two months (7.45").

The 22-day streak with below average temperatures (March 7-28) was the fifth longest in the years since 1950.  But while it was one of the longest below-average streaks on record it wasn't a particularly cold one.  At 4.5 degrees below average it was the least below-average of any streak of 15 days or longer.  Another curious aspect about this March was that it shared some characteristics with Marches that were milder than average, i.e., very few lows in the 20s (just two), a coldest high that was around 40°, and no days that were ten degrees or more colder than average. 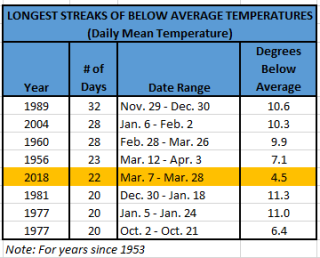 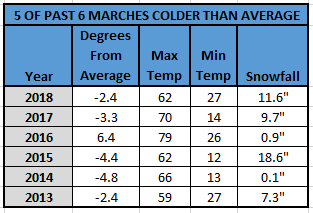 with 11.6 inches, this was the fifth snowiest March since 1980 and not only did this month have the same number of days of measurable precipitation as last March (12), both Marches had a nearly identical total amount (5.17" and 5.25").

Hi Rob, as usual your monthly recap for March was informative and interesting. In addition to what you noted, I wanted to point out that 26 of the 31 days of March 2018 had low temps in the 30s. This has happened only 17 other times going back to 1872. Also, did you realize that the 8.2" of snow on the 21st was a new daily record (previously 1958)?

in my opinion, the (most) jaw dropping statement in this analysis was when you said "All but 0.11" of the month's 5.17" came from these nor'easters." in other words, this is saying the nor'easters are the only thing that kept this month from being the second driest on record.