May 2018 Weather Recap - Big Rebound From April
No Thunderstorms in Central Park for the Past 15 Years? So Says the National Weather Service 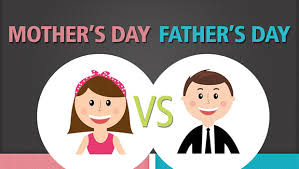 Since Father's Day is about five weeks later than Mother's Day its high temperature is, on average, about thirteen degrees warmer (82° vs. 69°).  However, in 2018 there was a huge disparity in the temperatures as Father's Day had a sizzling high of 91° while Mother's Day's was only 54°.  This 37-degree difference tied 2010 for the greatest difference in temperature between the two holidays (and there was a 36-degree difference in 1994).  However, not every Father's Day has been warmer.  Since 1960 there have been eight Mother's Days with warmer highs (most recently in 2014), with the greatest difference being 28 degrees in 1970.  And sometimes the two holidays have similar readings; for example, in 2000 and 1974 they had the same high temperature. 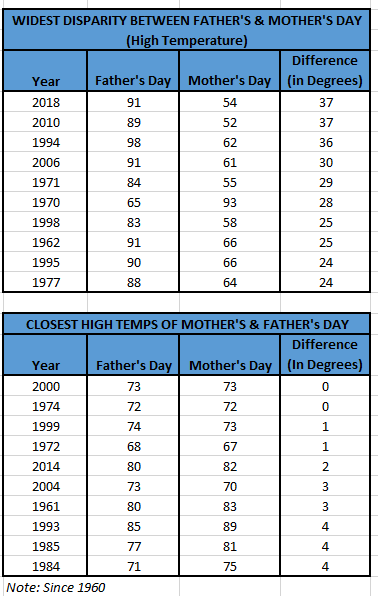 why is there such thing as mother nature but not father nature? are the two of them no longer married to each other or something?

Perhaps because God is often referred to as a man, to even things out we have "Mother" Nature? A somewhat similar question is, why do athletes usually say "hi, Mom" when they're on-camera during a game?

I have actually heard everything (such as hi bro, hi sis, hi dad, hi grandma and grandpa, etc.), not just hi mom, when someone is talking while he or she is on camera during an event, regardless of the kind of event.