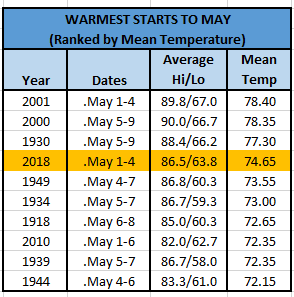 this was the first May since 2007 not to have any days with rain of one inch or more. in fact, the "rainiest" day this month was 0.65", the lowest amount to have this distinction in May since 2005 when 0.26" was measured. this was the fourth month in a row with at least twelve days of measurable rain, the longest such streak since Oct. 2007-Mar. 2008.

this year's April and May combination was the exact opposite of last year, when April was one of the warmest on record and May was the chilliest in several years.