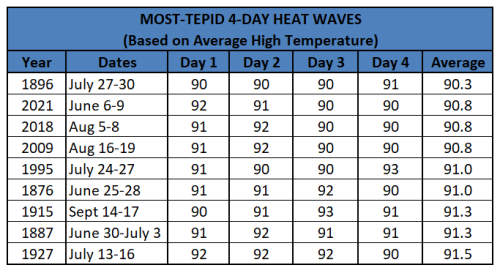 However, the story changes when low temperatures are included in the analysis.  For example, this August's heat wave had an average low of 75.0°, which was 1.3 degrees warmer than the average four-day streak and warmer than two-thirds of the four-day heat waves examined.  When combined with the average high, the mean temperature ranked as 27th coolest - quite a difference in ranking compared to its average high alone.  (This follows the weather storyline of this century, whereby nighttime temperatures in New York are warming more than daytime temperatures.) 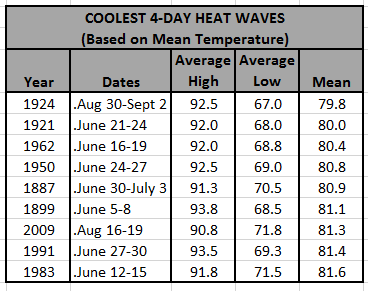 Finally, while the typical four-day heat wave had a 20-degree difference between its high and low, this August's was 15.8 degrees apart, which was the third smallest diurnal variation of the heat waves studied (a heat wave in July 1995 had the smallest, 14.7 degrees, while the second smallest was in July 1870).

does this analysis include heat waves that have lasted for more than four days or just four days exactly? also, did 2018 set some kind of record for one of the warmest beginnings to August since the first ten days all had highs above 80° and lows above 70°?

This analysis was limited to heat waves of four days in length. Regarding your second question, the hottest beginning to August was in 1955 when the first seven days were all in the 90s and averaged a high/low of 96/75. And the first ten days of August 2001 had an average high/low of 93/74, with eight days in the 90s.

I'm glad you found this post. (I'll have to update the chart.) Yes, hot temperatures, at least in CPK, seem to have been suppressed during the past 10 years compared to hot days of the past. But, despite "cooler" hot readings, the mean temperatures are often higher, because daily lows are noticeably warmer; this seems to be how climate change is having its impact (at least in CPK).