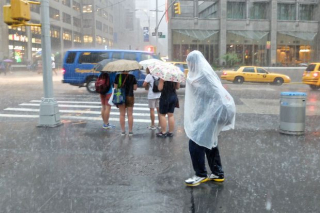 If July 2018 were a cocktail its ingredients would be one part heat, three parts rain.  After a hot start, with temperatures nine degrees above average during the month's first five days (average high/low was 92°/78°), the rest of July was seasonably warm, which moderated the month's average temperature to 1.1 degree above average.  As for the rain, after a dry start, with just 0.24" measured through July 11, the skies opened up and the rest of the month was very rainy, with 7.21" measured.  With 7.45" in total this was the rainiest month in more than four years, since April 2014, and the rainiest July in fourteen (and the fourteenth wettest July on record).

In late July there were seven days in a row (July 21-27) in which measurable rain fell.  This was the fourth streak of six days or more this year, joining 1989 as the only two years since 1900 with four streaks of six days or longer.  (Besides the persistent rain, dew points throughout this week-long period were in the uncomfortable 72°-74° range.) 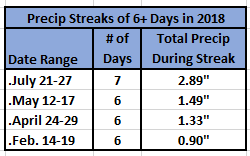 Downpours on 7/12 and 7/30 were confined to upper Manhattan; Central Park had 0.71" and 0.37", respectively, but my neighborhood, Greenwich Village, four miles south of the park, was dry.  And during the afternoon of 7/17 Manhattan was the bulls-eye for torrential rain from a severe thunderstorm, with 2.24" pouring down in little more than an hour.  Conversely, on 7/27 thunderstorms during late afternoon thru evening produced more than an inch of rain in most parts of the metro area (and 3-5" in parts of east-central NJ) but Central Park had only 0.25".

July's rainfall in Central Park was considerably more than the three other reporting sites in the metro area: 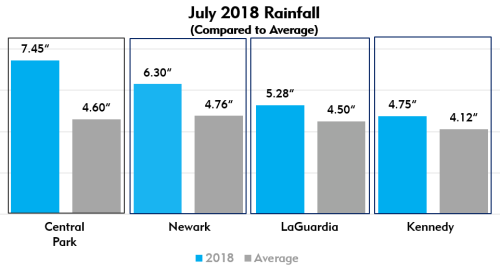 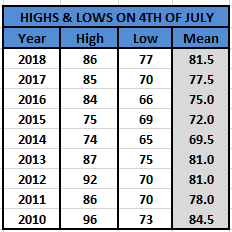 as always, I enjoy reading the monthly recaps, especially the alcoholic beverage reference in the very first sentence of this analysis! I noticed this is the sixth July in which a monthly recap was published on this blog, the most of any other month. this month brought to mind July 2016. both Julys were hotter and rainier than normal, and in both years, July (7.02" in 2016) had more rain than May and June combined (6.35" in 2016). this was the rainiest month in climatological summer (June-August) since June 2013, when 10.10" fell, and the twelfth rainiest summer month in the past three decades.

this was the first month since November 2016, and the first July since 2009, not to have any days with a trace of precipitation.