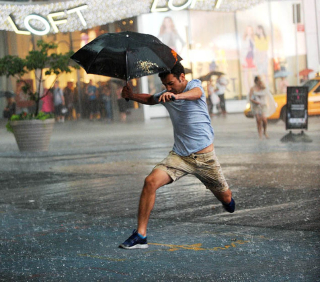 July's rainy and warm conditions carried over into August, which was even warmer and wetter, ending up as the ninth warmest August on record and the twelfth wettest.  It was 2.9 degrees above average and warmer than July (something that's happened in 22% of the years since records began in 1869).  Despite August being warmer than July (by 0.5 degrees), July's average high was slightly higher (84.9 vs 84.3); it was August's average low that made it warmer overall (72.0 vs. 70.4).  In terms of rainfall, August's 8.59" was about an inch more than what was measured in July (7.45"), with much of it falling during heavy downpours during thunderstorms.  Here are additional observations worth noting: 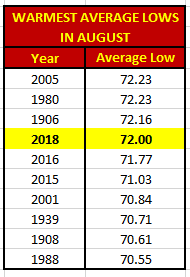 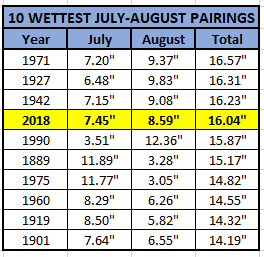 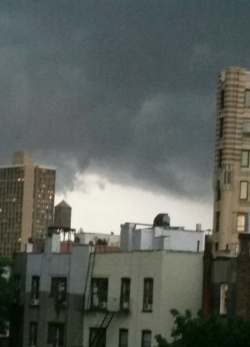 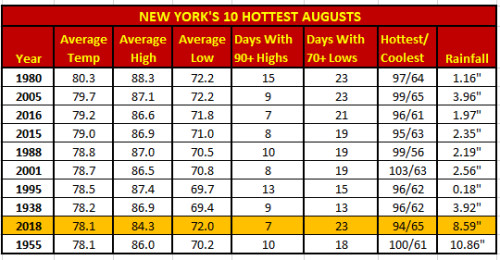 not only was this the rainiest month since June 2013 (when just over ten inches fell), but this was also the tenth rainiest month since 2000. this month joined six others (most recently in July 2008 and August 2005) as the only ones in which the temperature went no lower than 65°. an extended streak of days with lows of 65°+ that began on July 13 continued through August. By 8/31, the streak had grown to fifty days, tying 2016 as the fourth longest such streak and the streak was expected to eclipse 2005's all-time streak of 58 days.

There were 107 days of measurable precipitation in the first eight months of this year (which was 14 fewer than ALL of last year), the most ever in the first two-thirds of a year, besting 1950 by one day. However, despite the number of days, the combined amount of precipitation that fell so far this year (41.64") didn't rank among the five wettest. Instead, 2018 was ranked as the seventh rainiest Jan-Aug on record. The night time warmth coupled with the wet weather is what really made this month stick out like a sore thumb. Among the thirteen Augusts with seven or more lows of 75°+, 2018 was the rainiest of them all (2.58" wetter than the second wettest).

While not the most total rain in any summer (ranked 6th). By my count, today was the 42nd time it rained during the Summer. The previous records was 40, in both 1915 and 2000.
Note: For ease of caluclation, I've defined summer as June 21st - September 20th. I acknowledge that this can change a bit from year to year (I believe this year, Fall starts on the 22nd). But this seemed to be the easiest way to define it. Looks like this will be the last rainy day of Summer.

Since it's such a pain in the ass to calculate season averages based on the astronomical calendar, the National Weather Service uses the "meteorological calendar", which uses entire months. According to this calendar, summer is considered to be June, July and August. Going by that metric I believe this summer is the 12th rainiest. But this doesn't mean your findings aren't valid - thanks for doing the research!

this month tied 2011 as the August with the most days of 0.50" or more of rain (eight days). however, this month had roughly ten and a half fewer inches of rain than what August 2011 experienced.