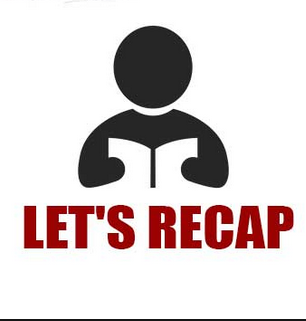 It was a wet year, indeed, the fourth wettest on record (behind 1983*, 2011 and 1972).  However, it began on the dry side, with January receiving just 2.18" of precipitation (it was the third drier than average month in a row, with just 5.97" measured in total; and five of the six years preceding 2018 had below average rainfall).  And while the amount of precipitation that fell during the first half of the year was close to average, the rain gauge worked overtime in the second half as 40 inches was measured, 56% greater than what fell in the first half (five of the six months had six inches or more of precipitation).  And although the year wasn't the wettest on record, it did claim the crown for most days of measurable precipitation.  As 2018 came to a close it seemed fitting that it ended with a soaking rain on New Year's Eve, making it the wettest 12/31 since 1948, and the first time since 1994 that rain fell as the ball dropped in Times Square.

* An argument can be made for 2018 being ranked third because 1983's claim as New York's wettest year has been called into question after it was revealed that the rain gauge in Central Park was broken for a large part of the year, allowing rain to enter from multiple entry points. 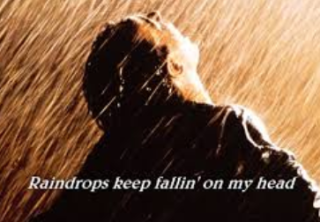 Now let's shine some light on the year's other major weather stories: 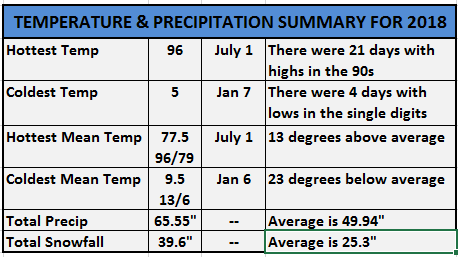 Central Park's anemometer was broken during the final two and a half months of the year (and it would continue to be broken through at least part of January 2019). I don't get why so much time is needed for it to be repaired, nor can I ever remember a time where the NWS in New York has spent several weeks, if not months, issuing hourly weather observations with a malfunctioning anemometer. as a result, weather broadcasters have had to use the anemometer from one of the three major area airports (LGA has been the most frequent one) when they state what the current wind direction and speed is in NYC.

Embedded in the year's 158 days of measurable precipitation were five 6+ day streaks. this was the most of any year on record and one more than what 1989 experienced. The last one of them in 2018 occurred from 9/8 through 9/13.

one-third of the year's lows in the seventies occurred during the first two-thirds of August as the month's first eighteen days all had lows in the 70s (only in 1988 has this also happened). this tied 1995 and 1898 as the fourth lengthiest such streak on record and the lengthiest since June -July of 2013 when the streak was one day longer.

this was the fourth year of the past five with a "blizzard that fizzled". it was on March 7 this year, March 14 last year, January 26 & 27 in 2015, and on March 3 in 2014. I kind of feel like this is the new, yet annoying, normal now. I hope this doesn't turn into any kind of trend in the years ahead. no wonder why they say forecasting the weather is always difficult and/or wrong.