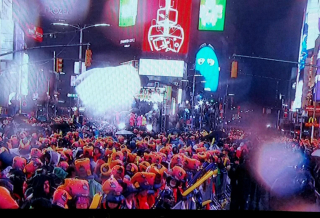 2018 was New York's fourth wettest year on record (third if the disputed 1983 is excluded) and the final month of the year followed that theme.  December was the year's fifth month with six inches or more of precipitation (all of them occurring in the second half of the year).  The month ended with the wettest New Year's Eve since 1948, and for the first time since 1994 rain fell during the ball drop in Times Square (pictured).  Most of the month's 6.51" of rain (the ninth wettest December on record) fell after 12/13.  This followed a ten-day dry spell, which was the longest in more than a year.  Four days had an inch or more of rain, all in the second half of the month.

December was 2.6 degrees milder than average.  The month started out colder than average, with Dec. 1-13 averaging three degrees below average, then a shift occurred and the rest of the month was nearly six degrees above average.  The final twelve days of the month all had above average temperatures (as did sixteen of the last eighteen).  The range in temperatures was rather narrow, from 24° to 61° (the coldest reading in December is typically in the upper teens while the mildest reading is in the low 60s).

November 2018 was snowier and had colder readings than December (two days had lows in the teens).  Typically December is ten degrees colder than November but this year it was only four degrees colder.  Just ten other Decembers have been closer to November's average temperature. 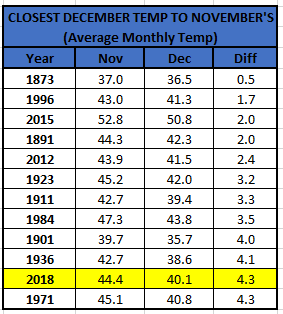 After 6.4" of snow fell in November (all on 11/15) there was just a trace of snow in December.  This was the twentieth December on record with a trace of snow or less (nine of them have been in the past 25 years).  And it joined a handful of Decembers with much less snow than November. 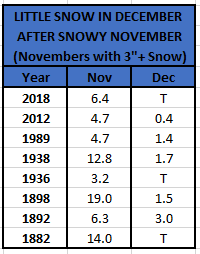 Finally, December had the same average temperature as March (40.1°).  December is typically about five degrees colder.  However, while the overall temperature was the same as March's, December's average high was about a degree colder than March while its average low was about one degree milder.  And while both month's had above average precipitation, March was much snowier, with 11.6" measured.

among the 21 Novembers with two inches or more of snow, this was just the fourth one of those 21 Decembers that followed not to experience any measurable snow. the other three years were 1953, 1936 and 1882. the Decembers of 1908 (six), 1960 (five), 1981 (six) and this year (five), are the only four to have five or more days with a high temperature of 40°. this year joined 1969 (four) and 1973 (five) as the only three Decembers with four or more days that produced an inch or more of precipitation. I'm not surprised about this month having no snow after last month's 6.4", cause after all, early season snow isn't always a predecessor to a snowier than normal winter, as was the case during the most recent such winters of 1990, 1997, 2012 and 2013.

I don't know which two you missed, but you might want to double (or triple) check your research. Central Park has now experienced 22 Decembers with a trace of snow or less, not twenty.