Weather Highights of 2019
Winters With Snow Droughts Rather Than Snowdrifts

January 2019 Weather Recap: Average ... But With a Few Flourishes 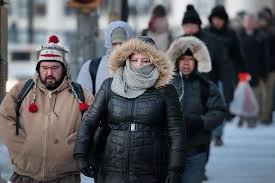 January 2019 was average in terms of temperature and precipitation, but this masked the fact that it had two of the five coldest days of the past 25 years.  It was also one of the least snowy Januarys on record.  After the first nine days of the month averaged seven degrees above average, the rest of January was three degrees colder than average, with respective highs/lows of 45°/35° and 37°/23°.  (The month began with a high/low of 58°/39° and ended with a high/low of 16°/2°.)  Despite the month being average overall, the month's high temperature was 0.7 degree above average while the low was 0.9 below average.

Barely any snow fell in January, with just 1.1" measured from three snowfalls (if you can call them that), making this the least snowy January since 2008.  Furthermore, January tied January 1870 as the 16th least snowy January on record.  But what made this year's paltry amount somewhat unique is that past Januarys with little snow tended to be on the mild side, but January 2019 was 4.4 degrees colder than these months. (Fun fact: The four Januarys between 1930 and 1933 each had less than an inch of snow.) 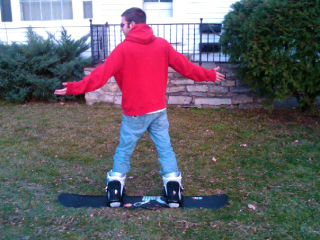 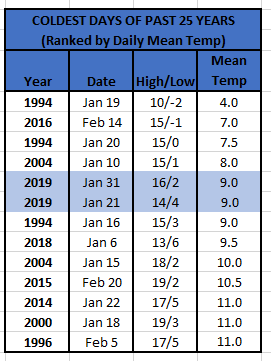 When 0.5" of snow fell on 1/18 (the month's "biggest" snowfall) it was the first snowfall since the "surprise" snowstorm of Nov. 15.  This was the second longest hiatus between a first and second snowfall (lengthiest was 12 weeks in 2011-12).  Furthermore, December/January was the fifth least snowy on record, with just 1.1" measured in Central Park (no measurable snow fell in December).  Perhaps Old Man Winter took pity on us after his surprise 6.4" snowfall back in November.  Interestingly, the winter of 1918-19, one hundred years ago, had even less snow in Dec/Jan. 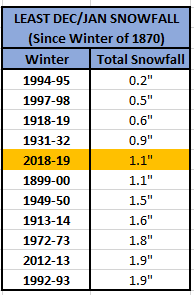 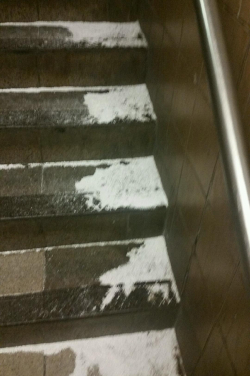 Aggressive salting of streets, steps and sidewalks somewhat substituted for the lack of snow in January.

This is the first month since the infamous January 1994 to have two days or more that have a mean temperature in the single digits. This is also the first January since 1927 that has a low of two degrees or colder to average over 30 degrees, and this is the mildest January to have a low that frigid.