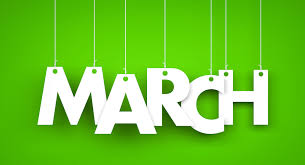 March began with a continuation of unseasonably cold temperatures that arrived in the last three days of February.  This extended Arctic outbreak persisted through the first eight days of the month; the average high/low during these days was 36°/25°, nine degrees colder than average.  This included three days in a row with highs of 32° or colder - the longest such stretch in March since 1984.  Besides the cold, an inch or more of snow fell on each of the first four days of the month - the longest streak of its kind.  The 10.4" that fell more than doubled the amount of snow from the previous four months (10.1"), making this the fourth winter of the past five in which March was the snowiest month.

After March's harsh beginning, temperatures recovered and the rest of the month was two degrees above average, with the coldest reading being 32° (on two days) - and there was no measurable snowfall.  The month's mildest reading was 75° (26 degrees above average, two degrees shy of the record for the date), which occurred on 3/15.  A second day in the 70s came two weeks later (70° on 3/30).  Overall, the month was 0.8 degree below average, making it the sixth March of the past seven that was colder than average (but of the six years, 2019 was closest to average). 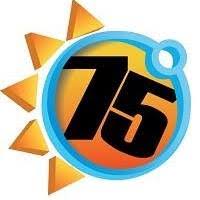 Like the temperature, the month's precipitation (3.87") was also slightly below average. The biggest rainfall of the month, and so far this year, occurred on 3/21-22 when 1.43" was measured.  This rainstorm was book-ended by three days before and five days after that had unusually low humidity; the lowest was reported on 3/24 and 3/26 when a few hours in the afternoon had readings of 13% and 14%, respectively.

The 11-day stretch between Feb. 26 and March 8 saw the most wintry conditions of the winter.  The five-inch snowfall on March 3-4 was the second biggest on record to fall in temperatures that stayed above freezing (the greatest accumulation in above-freezing temperatures happened last year when 5.5" fell the morning of 4/2).

Of all the Marches since 1950, March 2019 ranks among the ten with the coldest starts. 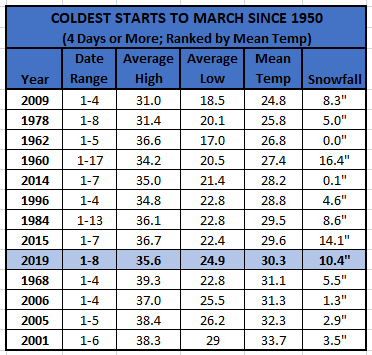 this was just the eighth March on record with no lows of 31° or colder in the last twenty-three days of the month. 2016 and 1962 were the most recent such Marches. the day with the highest precipitation amount this month was 0.75" on 3/21 (fell as plain rain). this was the same as last month's highest precipitation amount, on 2/12, and the precip fell as 1.2" of snow. until this year, New York has never experienced a March with a 75°+ temp and 10+ inches of snow in the same month.

regarding the information in the bottom chart, what's interesting is although this was one of the snowiest Marches (only 1960 and 2015 have been snowier), this March was also one of the mildest. only four of the thirteen Marches in the chart have been milder than this year.

interesting that this was the fourth winter of the past five in which March was the snowiest month, because the Marches of 2020 and 2021 would have no measurable snow, and March 2022 would also not even have half an inch of snow either.