National Weather Service's Year-Round Use of 'Standard Time' Can Cause Confusion
May 2019 Continued April's Wet Trend, But With More Rain As we headed into the last week of April, it appeared the month had a good chance of becoming either the fifth, sixth or seventh mildest April on record.  But when the last five days of the month averaged five degrees cooler than average, it ended up as the 13th mildest, 2.5 degrees above average (still a noteworthy achievement as it was milder than 138 other Aprils).  Perhaps a bigger highlight was the month's 18 days with measurable precipitation, the most since May 2012.  This was also the most days of precipitation of any April.  However, despite the frequent rainfall, the 4.55" that was measured was just an average amount.  Despite being only average, this amount was enough to make April the wettest month so far this year.

The five chilly days at the end of the month were immediately preceded by a two-week period with above average temperatures (six degrees above average); this was the longest streak of above average days since one of eighteen days in late December/early January.  This mild streak included the year's first reading in the 80s - 80° on 4/19, which was Good Friday (just the fifth Good Friday with a high in the 80s); Easter Sunday cooled down to a high of 66°.  The month's coldest reading, 33°, occurred on 4/1.  (Since 2000 April's warmest temperature has averaged 85°, its coldest reading has averaged 33°.)

Finally, 2019's mild April came a year after the coldest April in 40 years (which followed the second mildest April on record).  Despite the disparity between the two years, April 2018's warmest temperature was two degrees above this year's (82° vs. 80°) while its coldest reading was just one degree lower (32°). 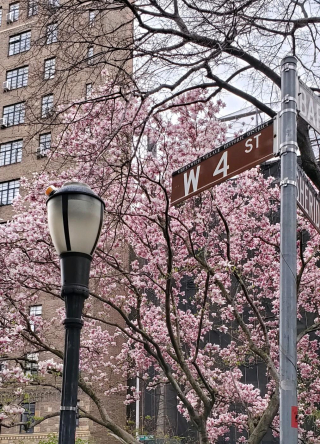 Here are recaps of previous Aprils:

among all calendar months with 18 or more days of measurable precipitation, did this month set a new record at all for the smallest amount of precip of these months?

Hi, I have a question regarding a rainfall metric. As you well noted, 2018 may not have made top ranks in total rainfall, as the the 1st half was fairly average. However, as I recall, in early August of last year the jet stream shifted in such a way as to create essentially a corridor of nearly daily showers/thunderstorms throughout entire coastal northeast that dominated the weather that month. If you took a local vacation in July you were a very happy beachgoer vs. not so much in August! And while the jet stream has obviously shifted variably since, the parade of low pressure systems this spring seems endless!

So finally my question: what was the rainfall from August 2018-April 2019 and how does that compare to a typical calendar 8 months year-to-date?