Junes With No 90-Degree Days

As meteorological summer gets underway (June 1 thru Aug. 31) a typical June will see two or three days with highs in the 90s.  However, about once every five years no readings this hot occur; since 1869 there have been 31 years in which this has happened, most recently in 2016 (and at the other end of the spectrum, one June in four has five or more 90-degree days, the most recent being in 2012).

Using 90° as the cut-off for hot conditions, rather than 88° or 89°, is a bit arbitrary (and doesn't take into account humidity levels).  Nonetheless, a June with no readings of 90+ is usually results in a cooler than average June.  For example, none of the ten coolest Junes had any high temperatures in the 90s.  Additionally, the five coolest summers started out with a June with no 90-degree readings.  But not every June with no readings in the 90s is so cool.  In fact, the warmest June with no 90s was in 2014.  It was 1.1 degree warmer than average and ranks 39th warmest (out of 150).  And, surprisingly, one of the ten hottest summers, 2016's, started out with a 90s-free June.  Here are some other tidbits: 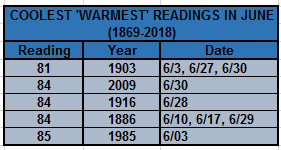 May 2019 Continued April's Wet Trend, But With More Rain 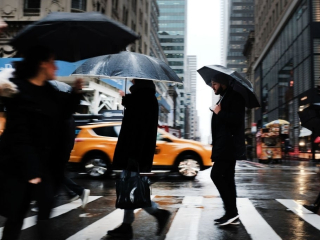 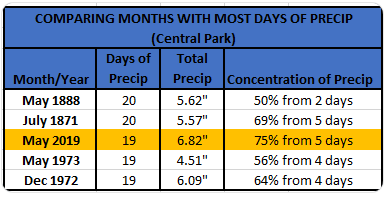 In addition to the well above average number of rainy days, this May will also be remembered for the damp and unusually cool conditions on Mother's Day and the two days after.  2.32" of rain fell on these three days (1.32" of it on Mother's Day) and the average high/low of 53°/43° was 14 degrees cooler than average.  By contrast, the Memorial Day weekend was mostly nice,  the exception being later in the afternoon on Sunday when clouds moved in and there was an hour of heavy showers.  The three-day weekend's average high/low was 79°/60°, four degrees above average, and featured the warmest reading of the month, 86° on Sunday.  (The warmest mean temperature, however, occurred on 5/20, one week before Memorial Day, with a high/low of 85°/66°).

Temperature-wise, the month was average (officially, 0.2 degree below average), with the first half of May three degrees below average while the second half was two degrees above average.  (If the chilly three-day period from May 12-14 were taken out, the month would have been 1.3 degrees milder than average.)  Seven days were five or more degrees above average while six were five or more below average.  Four days with highs in the 80s were balanced by four days with lows in the 40s, both fewer than the month's average (of seven and six days, respectively).

Here are recaps of the previous four Mays: